Following up their well-received self-titled debut album on HELLS HEADBANGERS, Ohio death-thrash cult CRUCIFIED MORTALS present a video for their latest metallic horror hymn “The Late Night Butcher.” A gruesome tale of an entrepreneur gaining his fortune on the success of selling human meat to unknowingly cannibalistic consumers, “The Late Night Butcher” will be accompanied by another new song, “Covet,” and will both be available on a split 7″ EP with Czech Republic’s young thrash band Radiolokator from Doomentia Records (www.dommentia.com) early fall! The video for CRUCIFIED MORTALS’ “The Late Night Butcher” can be viewed in all its gory detail here: http://www.youtube.com/watch?v=LA8mpoMzSDw 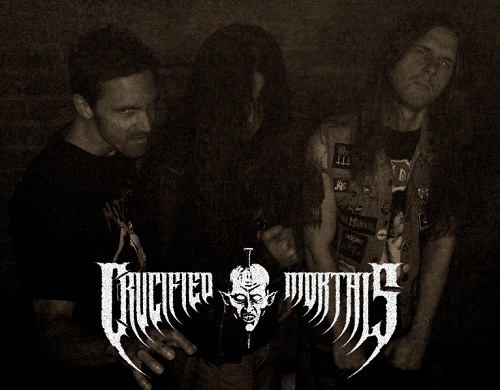 Released during March 2011 through HELLS HEADBANGERS, the self-titled debut of CRUCIFIED MORTALS came ten years after a prolific stream of EPs and demos. Comprising 11 tales of horror transcribed into metallic hymns, Crucified Mortals continued the band’s haunting style with their best tracks to date. The record compiles a diverse range of tracks which satisfies the ear’s craving for speed, heavy and memorable riffing complemented by harsh, angry vocals and pounding drums. A truly unique style of thrash and death metal, this self-titled album combines the elements of both genres to create its own appalling sound, and found favor across the international underground. With a new lineup in tow, CRUCIFIED MORTALS will continue their metal onslaught into 2013 and beyond…the grave!