The story of CRYSTAL EYES began back in 1992, when Mikael Dahl and Niclas Karlsson formed the band to keep the legacy of heavy metal set in the 80’s by bands like Judas Priest, Iron Maiden or Black Sabbath.
During the mid 90’s, the band built a strong underground reputation with the release of 4 demo tapes. 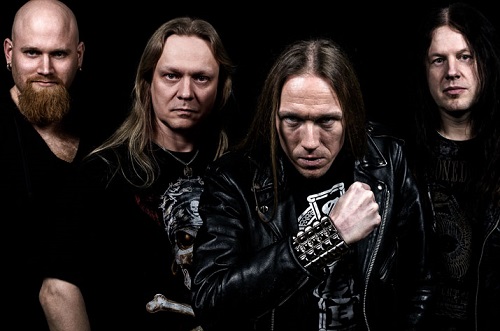 The debut album “World Of Black And Silver” was released in 1999, followed by “In Silence They March” in 2000 both via CLM. Both albums received great reviews.

“Vengeance Descending” hit the stores in 2003, released on Heavy Fidelity, and led to CRYSTAL EYES playing at the Sweden Rock Festival in the same year. Mikael handed over the microphone to Daniel Heiman, who was featured as new vocalist on the band’s 4th album “Confessions Of The Maker” (2005).

Also in 2005, CRYSTAL EYES returned to Sweden Rock as opening act. This gig was the only one with Daniel on vocals, who was then replaced by Søren Nico Adamsen in late 2005.

The two following albums “Dead City Dreaming” (2006) and “Chained” (2008) were both mixed by Fredrik Nordström, with whom the band once again worked on the upcoming album.

Søren Nico Adamsen left the band in 2009 and Mikael took over the microphone again.

CRYSTAL EYES celebrated the band’s 20th anniversary in 2012 with special gigs including former band members and songs from every record.
In the past decades, CRYSTAL EYES also supported bands like Blind Guardian, Yngwie Malmsteen and Candlemass.

CRYSTAL EYES‘ new album “Killer” is set to be released later this year via Massacre Records!