Having stepped it up a gear, CRYSTAL TEARS sound more brutal, heavy & melodic than ever! 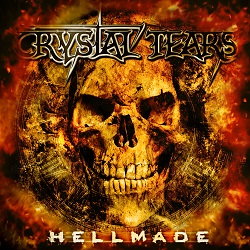 The cover artwork of “Hellmade” was designed by Siege Ind, who already worked with bands such as Scar Symmetry, Suicide Silence or Bleed From Within.

CRYSTAL TEARS have also launched a competition where you can win free merchandise!

All you have to do is to answer a question about a song that the band is going to cover on their upcoming album “Hellmade“.

CRYSTAL TEARS‘ new album “Hellmade” is scheduled to be released in autumn/winter 2013 via Massacre Records!