We want to welcome the multinational quintet CRYSTAL TEARS to the Massacre Records family!

The band was formed in the late 90’s in Greece and issued several demos before they released their debut album “Choirs Of Immortal” in 2006 via Pure Steel Records.

It didn’t take long until they shared stages with bands such as W.A.S.P., Riot or Jag Panzer!

CRYSTAL TEARS have left their mark as one of Greece’s best heavy metal acts and have proven to be a persistent, innovative and unstoppable force.

Their musical roots can be traced back from the good ol’ heavy metal of the Eighties up to modern metal.

Their second album “Generation X” followed in 2010 and was released via 7Hard. The album received rave reviews worldwide and initiated the band’s first tour in Greece.

The band announced the addition of the Danish singer Søren Nico Adamsen (ex-Artillery) as well as the Hungarian guitarist Máté Nagy in late 2012 and started working on their third full-length album, which was recorded with producer R. D. Liapakis (Mystic Prophecy, Devil’s Train).

With the new line-up, CRYSTAL TEARS sound more brutal, heavy & melodic than ever!

Drummer Chrisafis about the signing:
“It’s a funny feeling… I own so many albums from Massacre Records’ catalogue and now CRYSTAL TEARS is a part of the family… yes! We want to thank all the people that put their trust in us and that have been supporting our band one way or another. We promise that we’ll do our best!” 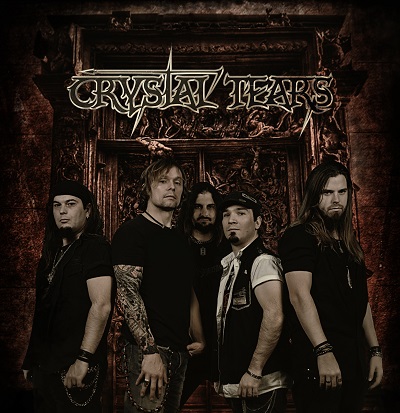