Polish female-fronted traditional heavy metal act CRYSTAL VIPER will release its new album, “Crimen Excepa“, in Europe on April 27 and in the U.S. on April 24 via AFM Records. The concept effort about holy inquisition, black magic and witches, where fiction is mixed with historical facts, was produced by Bart Gabriel (SACRED STEEL, JACK STARR’S BURNING STARR) and recorded with sound engineer Mariusz Pietka (MORTICIAN, LONEWOLF). The effort’s cover artwork was painted once again Chris Moyen (who has previously worked with SLAYER, BEHERIT and BLASPHEMY), and can be seen below.

“Crimen Excepta” will feature two special guests: David Bower, vocalist of HELL will appear in the title track, while VADER mainman Piotr “Peter” Wiwczarek will be heard in the cover version of the classic VADER song “Tyrani Piekiel”, which will be available as the bonus track on the first, limited edition of the album. 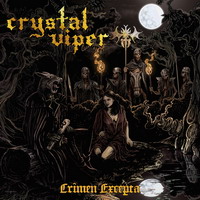