CURIMUS come from the city of Loimaa, Finland. The thrash metal band just celebrated their 10th anniversary and are gearing up for the release of their second full-length album, Artificial Revolution. The album will be released on April 25th on the band’s own label, Freezing Penguin, and distributed worldwide by Svart Records.

The production on CURIMUS‘ Artificial Revolution is the handiwork of both the band themselves and main producer Tom Gardiner and studio wizard Daniel Rantanen. When compared to debut album Realization (2011), much more work was done with pre-production on this one. After the first round of demos, it was already clear that the material destined to become the second CURIMUS album was to be more powerful and diverse than ever before. In production sessions, more focus was given to building a solid set of tracks, and this led to many songs experiencing major shape-shifting as the project rolled on. Artificial Revolution is a strong album that has the classic CURIMUS thrash metal aggression but lighter and melodic nuances, as well, and all of it end up making the album an even more crushing piece of thrash than ever before. A lyric video for the album’s first single “Preachings” can be viewed HERE. Cover and tracklisting are as follows: 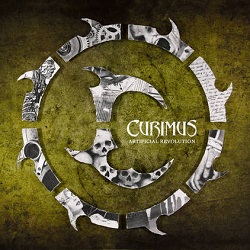