The band, still fronted by Sonja Kristina, selected the tracks after multi-track recording the entire first leg of its Live Atmosphere World Tour. Sonja Kristina elaborated by saying they did this “to capture the invention and interplay of these virtuoso musicians, the 21st century Curved Air….” The album was produced by Marvin Ayres and showcases both new and original members of the band.

The band took the bold move of self-financing and self-releasing the album in order to retain complete creative control of “Live Atmosphere”, which is exclusively available NOW from the band’s webstore and at their shows. The CD’s attractive digi-pack packaging also features a bonus DVD, filmed by Jane East, which shows the band backstage and live in concert.

“Live Atmosphere” includes many of the key recordings from the band’s repertoire, including the hits “It Happened Today” and “Backstreet Luv” as well as fan favourites such as “Propositions”, “Phantasmagoria” and “Stretch”. 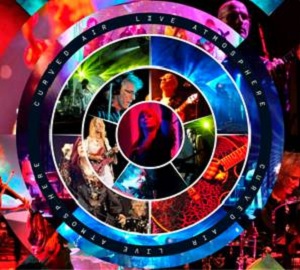 “Live Atmosphere” is available to order from www.curvedair.com