Hailing from beautiful Malta, VICTIMS OF CREATION are the newest members of the CYCLONE EMPIRE family and they will proof quickly why we are so sure that we needed to sign them. They describe their style as a very heavy, down-tuned sound, carrying both the old-school Doom/Death-metal and slow sludgey elements…be prepared to experience another underground pearl from this very cool and fertile Mediterranean doom Mecca. VICTIMS OF CREATION have already been announced for mighty DOOM SHALL RISE Festival 2013 and be sure, their debut album will be out in time before this great event…expect a release in late March or early April 2013!

Band-Statement: “We are honoured to join such a prestigious label which supports new talent and promotes the true underground scene. We are certain that the collaboration between us will spawn some dark and heavy Doom! Really looking forward to release our debut album in 2013!” 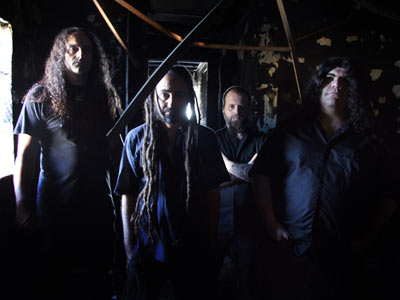 Biography:
VICTIMS OF CREATION is a Maltese band, was conceived in 1992 and debuted on stage in 1994 supporting local band Oblique Visions on the launch of their debut CD.
In 1996, the song ‘Lotions & Potions (Toke 1)’ was included in ‘The Core of Creation’, a local compilation released by Storm Records. The song did not reflect the band’s style at the time, however, it was very well acclaimed specifically for its originality. The launch of this compilation was the second and last gig of the band for some time.
Turbulent times, unlucky circumstances and various set-backs saw Dino and Rex (the remaining founding members of the band) experimenting with different guitarists during sporadic jammings. It seemed that VICTIMS OF CREATION would never rise from the ashes.
This was until AJ Burd, a guitarist who played with Rex and Dino in Death-metal band Lithomancy and also an interesting project called Tree, became the band’s new guitarist. Material from the Tree project together with some of the old material from VICTIMS OF CREATION was revived.
Daniel Bartolo, the man behind the one-man stoner-rock project Daredevil, as well as guitarist for a stoner/sludge/Doom project Rex and Dino have with the name of Griffin Device, was recruited as the second guitarist of the band to complete the current line-up.
2009 saw VICTIMS OF CREATION’s comeback on stage after 13 years! This was prompted by an invitation to the first edition of the Malta Doom Metal festival (MDM).
The exceptional response to VICTIMS OF CREATION’s performance injected new life into the band. A series of gigs followed and the band was also reconfirmed in both the following editions of the ever growing MDM festival which features both local and foreign ‘heavy-weight’ acts.
It was at the MDM festival in 2011 that VICTIMS OF CREATION was approached by Cyclone Empire. The rest is history…