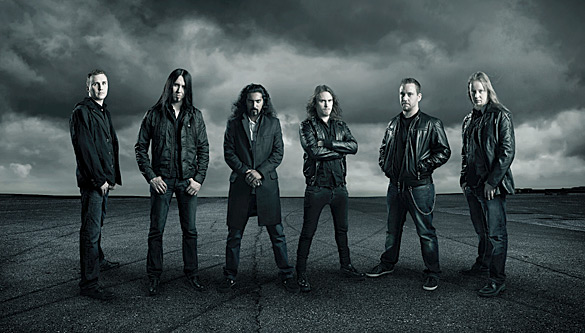 The two songs can be listened to below.

You can download MP3 files of Judgement Day (Terminator theme) and The Butcher Of Bakersfield (The Running Man theme) covers at the following link: http://www.facebook.com/damnationplan/app_203351739677351

Drummer/song writer Jarkko Lunnas comments:
“The Terminator theme idea came up when roughly 5 years ago during Finnish Labour’s Day celebration we ended up jamming the theme at our rehearsal room and recorded it. After that our friend Jaakko Jernberg suggested we should record it properly and release it! Well, during “The Wakening” sessions we did.

After the Terminat or version, we figured maybe we should do also a more profound tribute song for another Arnold movie, “The Running Man”.
It’s one of those classic movies you grew up with and of which you remember all the actors’ one-liners! The movie’s great theme music by Harold Faltermayer along the visual and sci-fi side of it have always been inspirational.
Considering that the original story (by Stephen King) and the movie were made in the 80s, its topic is actually quite current today, about the uprising reality-TV culture and the increasingly controlled and monitored society.”

Hot News: Damnation Plan – video of the song “Ashes” taken from the album “The Wakening” available