DARK ESSENCE RECORDS has announced details of “Alfapokalyps”, the upcoming album from Swedish rockers ALFAHANNE. The ten-track album will be the debut full-length release from ALFAHANNE, a name that is relatively new on the scene compared to some of the label’s more venerable artists, yet it is a band that has managed to tempt the likes of TAAKE’s Hoest, SHINING’s Niklas Kvarforth, and HELHEIM’s V’gandr to make guest appearances on “Alfapokalyps”. Set to hit the streets on the 10th of February, “Alfapokalyps” was mixed by Tore Stjerna at the Necromorbus Studio. Artwork is by Mikael Skoog. Track listing as follows: 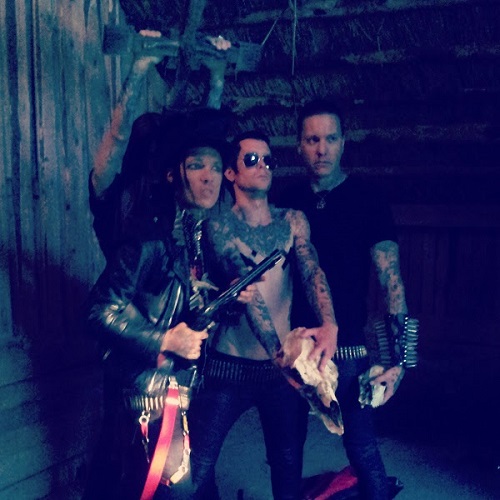 Formed in 2010, ALFAHANNE’s debut release came in 2013 with the release of the “Grym” split 7” with Sweden’s SHINING. ALFAHANNE plays what its members describe as ”Alfapocalyptic Rock”, which mixes Black Metal with Classic Rock and Punk, all topped off with some Goth influences. It is music that is both powerful and beautiful whilst at the same time is ugly, and about which the band says: “When you are into it you don´t feel pleasure and you don´t feel pain but you definitely FEEL”. Whilst ALFAHANNE might be a fairly new name to a lot of people, the band’s members, which include Pehr Skioldhammer on Vocals and Guitar, Fredrik Sööberg on Guitars, Niklas Åström on Drums and Jimmy Wiberg on Bass, have been around the Black Metal scene since the early ‘90’s, playing in bands like VINTERLAND and early MAZE OF TORMENT.

ALFAHANNE’s next live appearance will be on the 16th of April at the DARK ESSENCE RECORDS Club Night at the Inferno Festival in Oslo. They are also set to appear at the Tons of Rock Festival alongside SABATON, SEPULTURA and SOILWORK in June.

More information about ALFAHANNE can be found on the band’s Facebook page at https://www.facebook.com/alfahanneofficial