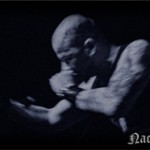 Lord Ahriman admits that it surely was not an easy task to find a worthy replacement for Emperor Magus Caligula, who has been doing an amazing job for Dark Funeral during the past 15 years. The Lord says that he has not only been “the vocalist” for the band, but the also a very good friend of his and he always will be!

Anyway 10 months of intense search worldwide have finally given result and he is VERY proud to announce and welcome “NACHTGARM” to the horde.

Lord Ahriman: “I think, I can speak for everyone in the band and say that besides completely knocking us down with the strength of his vocals and wide register, what truly blew us away was his presence, energy and the amazing spirit he showed during the final audition. He just came into the rehearsal room, found and took his rightful spot. And then just set the whole place on hellfire! It’s really hard to explain “that” certain feeling one is looking for, but once you get it, you just know that you’ve found the right man for the job. And that is something we all got “deluxe”. No doubt about that! Mankind has no idea what is coming upon them. And I can’t wait to bring this maniac on tour for the world to experience DARK FUNERAL in the most intense and hellish way ever!

During the 10 month we have been looking for a new vocalist and drummer, we have received over 1000 applications. The interest to join DARK FUNERAL has been way over expectation and quite overwhelming to say the least. And we would like to take this opportunity to thank EVERYONE who applied for the jobs. One thing is for sure: There are a lot of unknown talents out there. And once they’ve found the right band to deliver their goods, I’m sure we all will hear from many of these guys in the future. Good luck!”

Chaq Mol: When Emperor Magus Caligula quit the band my first thought was “how the fuck will we be able to find a worthy replacement now?”. In my eyes he was the best vocalist in the Black Metal scene. Anyhow, after we had listened through a couple of hundreds applicants, there were two guys that really stood out and sounded very promising indeed. The question now was, would they nail it on a live audition too, and would their personalities be of that kind we were looking for?! Well, after 10 month search we finally found the right man for the job! And all my previous doubts and concerns are now a memory forgotten. NACHTGARM, welcome to the horde!

Nachtgarm: To me, Dark Funeral is the epitome of Black Metal. To be a member of this institution now, is not only a big honor for me, but is also complementing my work as a lead singer as well as my action at the front of the stage throughout the years. Consequently, I am very glad that Dark Funeral put their unholy faith in me and my abilities. As the successor of Emperor Magus Caligula I am quite aware of the high expectations being directed to my person. However, I can assure every one of you out there, that with every breath I take I will live up to these expectations. Hands down. This is the arrival of Satan’s Empire. Now let us set this world aflame!

But that’s not all, DARK FUNERAL are also proud to announce to board 70000TONS OF METAL, The World’s Biggest Floating Heavy Metal Festival that will sail Monday, January 23, 2012 aboard the Royal Caribbean “Majesty of the Seas” from Miami, FL to George Town, Cayman Islands and will not return you to the real world for four days until Friday, January 27, 2012.

Make no mistake, 70000TONS OF METAL is not your grandma’s cruise. It’s also not one of the cruises that share the ship with regular cruise guests. This is an all Heavy Metal cruise! Can you imagine that? A whole luxury cruise ship full of metalheads? You can enjoy tons of onboard live shows on several in and outdoor stages from early in the morning until late at night, open-mic nights, Heavy Metal karaoke with members of the bands, bars that never close, again: bars that never close…, a fun-and-sun-filled day on the beautiful island of Grand Cayman and since there is no backstage area you will have the opportunity to mingle side-by-side with the artists in this incredibly fan-friendly scenario that has no comparison. It’s like everyone has a backstage pass!

Ticket prices start at US$666 plus US$289 taxes and fees per person and include all on-board entertainment, non-alcoholic and non-carbonated beverages, all meals at the dining rooms, most on-board restaurants and even 24 room service!

What are you waiting for? You might even need a vacation from this vacation when all is said and done! Check out http://www.70000tons.com/ for more information and book your cabin NOW!

Dark Funeral – „Nail Them To The Cross” videó