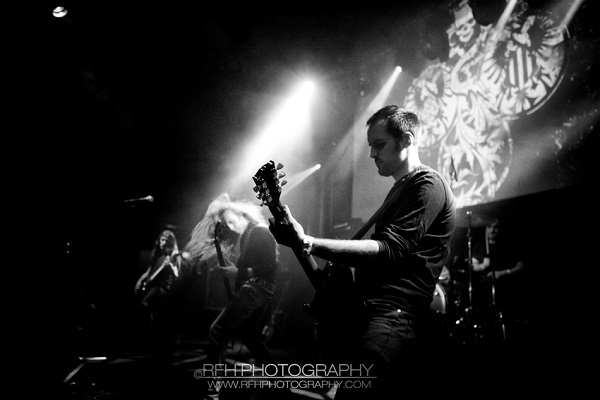 When Dark Metallers FOSCOR celebrated the Tenth Anniversary of their debut album in 2012, they were not just marking a decade of music; they were also drawing a line under one era in the band’s history, and preparing to embark on the next, and most ambitious one. With work on FOSCOR’s fourth full-length album now completed, and a complete visual overhaul of their online presence and logo, the groundwork for the new phase in the band’s career is well and truly established.

Formed in 1997 in Barcelona, in the Catalan region of Spain, FOSCOR took the traditional ‘90s Black Metal and mixed it with other classical and modern extreme styles to create a sound that has seen them through the release of 3 full-length albums, a live DVD commemorating their 10th Anniversary, 2 split releases and contributions on Official KATATONIA and ENSLAVED tribute albums, all of which have garnered them respect and a solid, and ever-growing, following. Now, with their forthcoming album, which will be titled “Those Horrors Wither”, FOSCOR has honed its considerable musical skills and decided to take the first gigantic step away from the confines of Black Metal, towards an expansive multidimensional sound that encompasses shades of Doom and Dark Rock, Ambient interludes and a healthy flirtation with Prog. It is a step that most clearly defines the band’s personal approach to their work, both musically and aesthetically, to date.

Commenting on the new sound and the new image of FOSCOR, founder and guitarist Falke and frontman Fiar had this to say: “It’s really not that strange that we would be moving in a different direction from the one we started out on because it’s a natural progression that comes from experience. We’re not saying that our long-time fans will wake up one morning and not recognise FOSCOR any more, not at all, because we have a particular style that is recognisable as FOSCOR – but we’ve taken that style and made it into something better. You could say that the new FOSCOR is evolution, not revolution, and, that being said, it actually needs new colours to define how we interpret “Darkness”, and IDEOPHONY, who has previously worked with us on design, is the perfect partner to work with us now in physically visualising our new direction”.

FOSCOR are currently looking for a label to release “Those Horrors Wither”, which includes some notable guest artists, who, somewhat unusually, rather than contributing the usual vocals or solos, have written and performed connecting passages between the tracks. More information about FOSCOR can be found on the band’s website, which has been newly designed, at http://www.foscor.com

FOSCOR’s entire set from their 2012 appearance at the Aurora Infernalis Festival in Arnhem can be seen at http://www.youtube.com/watch?v=X3FZXwrSXA4