Tampa metallers DARK SERMON have dropped their first single called “Imperfect Contrition.” The single is the first off their all new LP, “In Tongues,” (out: April 12).

The fast, riff-oriented track will instantly cause spontaneous headbanging in metalheads around the globe, particularly with its hooky breakdown.

Check it out below!

“The lyrics tell the story of a man who can no longer live with himself,”explains front man Johnny Crowder. “A man whose future has been shrouded by his sinful past.
All he can do is beg for forgiveness from God, who has witnessed every wrong move he has made.” 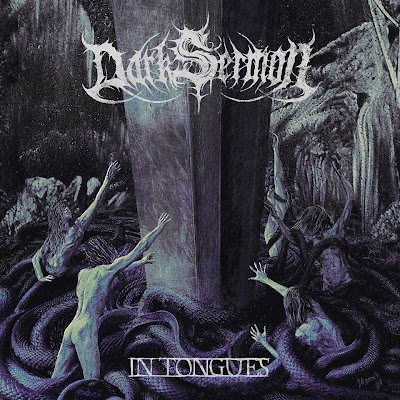 The band’s full-length debut entitled “In Tongues” was recorded at Audio Hammer Studios, Florida, and will be released in Europe on April 12, 2013.
The cover artwork was created by Eliran Kantor, who has already designed artworks for bands such as HATEBREED, TESTAMENT and SODOM.

Founded in 2009, DARK SERMON arrived in the worldwide metal community determined to stand apart from the cookie-cutter garbage and trend-following cretins who have overcrowded the scene. They don’t care about what’s marketable or what sells. The band has nothing less than total domination on their minds, armed with a new kind of heavy. The suffocating stomp of BEHEMOTH the brash experimentalism of GOJIRA and the all-out ferocity of American heroes like JOB FOR A COWBOY and THE BLACK DAHLIA MURDER all have a home in DARK SERMON’s cookbook, which slices and dices its way through the most exciting elements of metal’s subgenres with relentless aggression.

Check out the official video clip for the title track `In Tongues´ here: http://bit.ly/WlJmZv

More news on DARK SERMON and “In Tongues” to follow soon!