Following a multitude of releases on labels including At A Loss, Public Guilt and Underradar, in addition to self-released recordings, Maryland’s ultra-eclectic transcendental/drone rock unit DARSOMBRA have signed with Germany’s Exile On Mainstream for the release of their new full-length album, Climax Community.

In preparation for the release of Climax Community, DARSOMBRA have constructed a trailer showcasing both the expansive audio and visual aspects of the album. 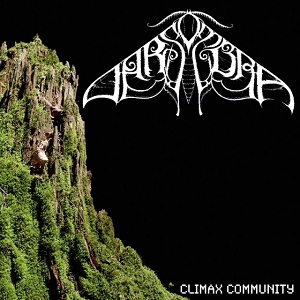 DARSOMBRA are currently embarked on an East Coast U.S. tour, with plans of hitting Europe in October as well in support of the release of the new album. More tours and live actions will be confirmed and announced in the coming weeks.

If we can invent the term “transcendental rock”, then let’s apply it to DARSOMBRA, Brian Daniloski and Ann Everton’s audiovisual music project. Daniloski, a veteran of heavier, sludgier, grittier rock bands such as Meatjack and Trephine, controls the sound of DARSOMBRA, alternating between mammoth vocal swells and soundscapes and searing guitar riffs, leads, loops, and samples. Take one part metal, one part psychedelic rock, one part experimental, and a dash of prog and krautrock, and you begin to have an idea why DARSOMBRA, as music, needs its own genre. But there is more than just Daniloski’s sonic world at play here as video artist Everton takes his work to the next level by bringing herDARSOMBRA-induced visions to the stage through her kinetic psychotropic video projections, creating a constantly shifting backdrop to Daniloski’s live performances.

Climax Community, DARSOMBRA’s 2012 release on Exile on Mainstream Records, brings Daniloski’s familiar epic arrangements, with a different feel of dynamics and speed than his previous efforts – but don’t be mislead: with three songs and clocking in at forty-five minutes, this is a record to dive into and exist within.  The first track, “Roaming the Periphery” is a twenty-three-minute opus of vast vocal swells and guitar pilgrimages, a full meal in itself, leaving the listener stimulated and soothed – this sort of psychedelic experience doesn’t recreate the effects of drugs; the music is the drug. “Roaming the Periphery” induces in a perfect state for absorbing the following acoustic track, “Green”, and the final, 18-minute, mind-melting, wordlessly-storytelling, and furious-in-5/4 track, “Thunder Thighs”.  The inclusion of “Green”, the short, earthy, acoustic piece between the two time-giants of the record, is a wise one: it reminds the listener that this isn’t the great mountain-monster from Fantasia’s “Night on Bald Mountain” creating these aural sagas – but rather, a man with a practice, on his guitar, everyday, from now to the horizon.

A climax community is “a biological community of plants and animals which, through the process of ecological succession — the development of vegetation in an area over time — has reached a steady state,” says good old Wikipedia. Climax Community is a record by DARSOMBRA, built and hewn from time, practice, and re-arrangement of one’s life for the love of creative journey to other planets through music.

Both LP and CD versions of Climax Community will be released with a direct link to the visual part of this project which shall be watched while listening to the album.