Austin, Texas’ DEAD EARTH POLITICS, who recently won Austin Chronicle’s Best Metal Band of 2012 award, is currently in Droplink Studios with engineer Josh Woodhouse for the follow-up to 2010’s acclaimed The Weight of Poseidon. With work on the release, an EP that includes tracks such as “Queen of Steel” and “Redneck Dragonslayer”, already underway, the band has launched an IndieGoGo pre-sale campaign to help fund album promotion, marketing and related merchandise.

The band is reaching out to fans for support in exchange for various perks, including a digital download of the EP on its 11/23 release date with a free download of The Weight of Poseidonsent within 24 hours of donation. Other offers include IndieGoGo exclusives like DEP onesies, doggie gear, Baby Doll Fluff Lounge shirts and specially-designed hoodies. Lighting gear, drum sticks and heads, and even a chance to shave your initials into the mighty, Scottish pelt of vocalist Ven Scott. Check out all the options and contribute now at: www.indiegogo.com/projects/dead-earth-politics-the-queen-of-steel-will-master-you

In other news, DEAD EARTH POLITICS was handpicked to perform at the first annual Housecore Horror Film Festival (October 25-27) in Austin with Down, Gwar, Hate Eternal, Crowbar, Goblin, Pig Destroyer, Warbeast and several others. The band will perform on October 27th. For details on the event,visit housecorehorrorfilmfestival.com. 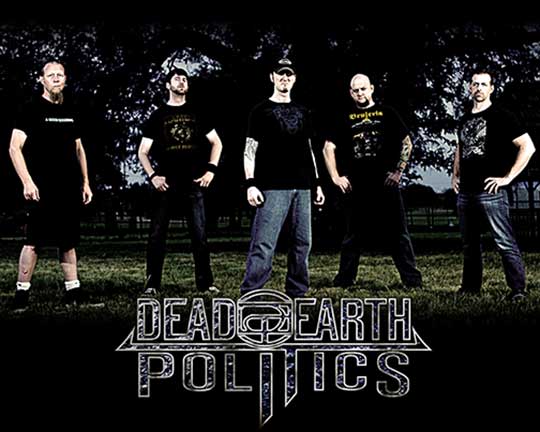