A Finnish metal band Dead Shape Figure will head for a tour in China in September 2012. The tour has five shows including Orange Island Music Festival held in Changsha. The festival is expecting at least 40 000 visitors this year. The bass player Neissu comments the upcoming shows:

“Our trip to China is going to be a brilliant end for ‘The Disease Of St. Vitus’ -tour. Since the album was released in October 2010, we have been playing in 14 countries and done numerous unforgettable gigs. The promoter in China has been really active. At the beginning we were meant to do only one show but now we are playing the whole week! Orange Music Festival will be our biggest show to date and we are the only westerner band in the whole festival. We are really looking forward to the shows!”

Dead Shape Figure has also been confirmed for a European tour with Iced Earth and Evergrey. The band has been in studio for the whole summer recording their third yet unnamed album. The producer of the album is XY from Samael. The album will be out before the European tour on December and will be released by Dynamic Arts Records. 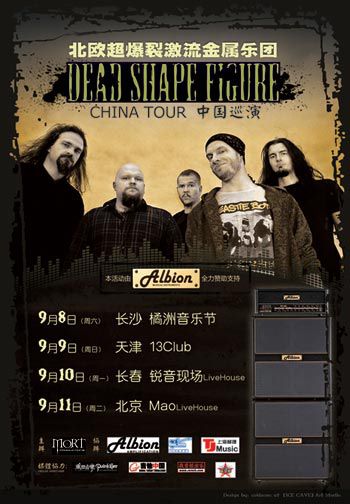