Soulseller Records is more than proud to announce the signing of Norway’s most wanted forces! DEAD TO THIS WORLD continues its march to the netherworlds after having signed a worldwide deal with Soulseller Records. First weapon of choice will be “SACRIFICE” , to be officially released 16th December 2011. This mini-album features close to 30 minutes of all-devouring darkness and shall be followed by a full-length in 2012.

“We are very pleased with the agreement with Soulseller and feel we have found mutual enthusiasm through them. We are ready once again and nothing will stand in our way. Let it be known.” (Iscariah, October 2011)

“SACRIFICE” was recorded and produced by the band itself and crafted just as they wanted it. The result is a foul and untamed force which has left them armed, hungry and ready to kill. Let the hunt begin!

Check out the brand new song “Death Courageous” at www.myspace.com/deadtothisworld

We are now taking pre-orders for the vinyl version of Dead To This World “Sacrifice” and the second print of Devil’s “Time to repent”, shipping of both vinyls will start mid November, check out the mailorder section for these items, package deals and other gems.

Front cover of “SACRIFICE” by DEAD TO THIS WORLD: 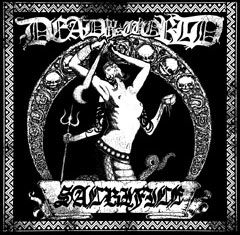