The German modern-metal heroes DEADLOCK have finished the work on their new album!

With “The Re-Arrival” DEADLOCK present their fans an impressive overview of their past work, which goes much further than the usual “Best-Of” releases. Within the 30 tracks on “The Re-Arrival” you’ll find some pretty rare and previously unreleased demo tracks from the very early days of the band’s history, complete re-arrangements of DEADLOCK classics and 3 brand new tracks with the new drummer and wunderkind Werner Riedl, which marks another step in the band’s evolution and which shows again, that guitarist Sebastian Reichl is a highly gifted songwriter if it comes down to hit potential of the tracks.

Sebastian Reichl about “The Re-Arrival”: “The recordings for the new album have been a travel back in time for all of us and especially for me as the last remaining founding member of Deadlock. Browsing through old recording-tracks, sorting out and partly re-arranging was more than an emotional experience – keeping in mind I play more than half of my life in this band. Feelings such as pride usually don’t have all too much impact on what I’m doing, but exactly that feeling comes most close to what I felt. It was simply amazing to touch our old hits again and to pack them in a new up-to-date sound – thanks to the whole Deadlock family for the past years and the years to come!” 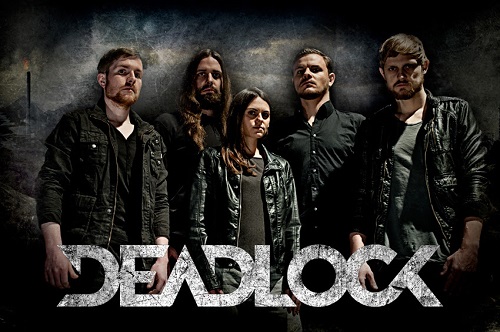 According to the proven principle of the previous recordings “The Re-Arrival” once again was produced simultaneously in different studios: aside the band’s own Slaughter’s Palace studio the band hit the Chemical Burn Studio in Bad Kösen again as well as for the first time the history-charged Chamäleon Recording Studios in Hamburg.

The 3 new songs were co-produced and mixed by Alexander Dietz (Heaven Shall Burn) and Eike O. Freese (Dark Age). Both are also responsible for the mix of the re-recordings and re-arrangements – Alexander Dietz has besides mastered all 30 tracks.

For the wonderful artwork of “The Re-Arrival” the band could win long-year friend Pepe (Azraeldesign).

Aside from the past and present the double album also portrays the future of the band. A breath-taking and passionately package for eachDEADLOCK fan and the ones still to become, because “The Re-Arrival” is the perfect entrance in order to dive into the DEADLOCK-world!

You can see DEADLOCK live at one of the following upcoming dates:

Deadlock, The Sleeper, Without Words – Koncertbeszámoló

Hot News: Deadlock to tour with The Unguided