Bay Area bands Bosse-de-Nage and Deafheaven recorded songs for a split EP late last month, with Deafheaven recording a cover of Mogwai’s “Punk Rock / Cody” and Bosse-de-Nage laying down a new track called “A Mimesis of Purpose”.  Both tracks will be available on this vinyl and digital release coming from Flenser Records later this Fall.  Deafheaven vocalist George Clarke commented, “We’ve been looking forward to this project for a while. It’s very exciting to be working with two of the most innovative and forward-thinking staples in the Bay Area, Bosse-de-Nage and Flenser Records.”

Pre-order details and song premieres will be coming next month.  In the meantime, check out www.TheFlenser.com for more information as it happens. 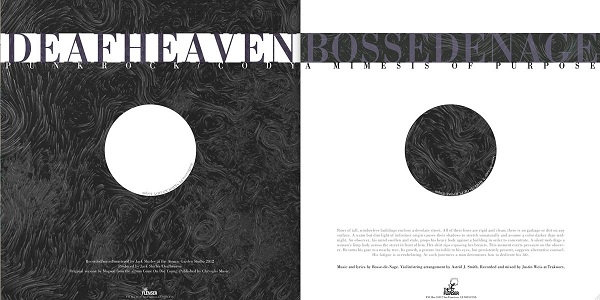 Deafheaven hails from San Francisco and their last album, Roads to Judah, landed on countless “best of” lists for 2011, including #6 on NPR’s Best Metal Albums and #22 on Pitchfork’s Top 40 Metal Albums.  Esquire Magazine called the band “Brutal and bracing, with a shoegazing indie-rock band’s ear for graceful melodicism.”