In the autumn of 2013, DEATH (DTA) completed a glorious trek: their tour left nothing behind but packed venues and thrilled fans!!!

The success of this tour proudly displayed once more the huge influence DEATH had and still have on the extreme metal genre. In remembrance of front man and guitarist extraordinaire Chuck Schuldiner and his masterfully crafted songs, Paul Masvidal, Sean Reinert, Steve di Giorgio and Max Phelps played songs off of all DEATH albums.

Since the request for more shows is rising constantly and not everybody managed to get tickets for the 2013 dates, DEATH (DTA) will return for a bunch of European festivals and selected club shows in June 2014. Don`t miss out on these true legends of death metal!!! 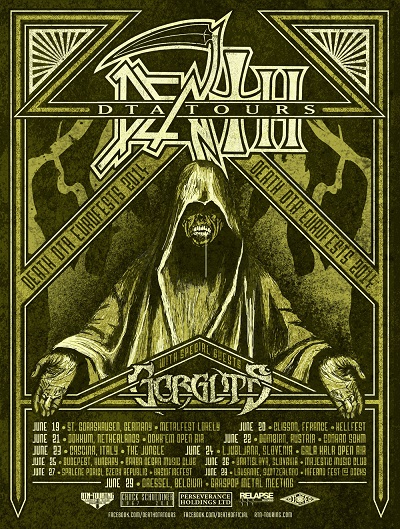