The good folks at DeathMetal.Org have taken a sledgehammer to the face of false metal by streaming a brand new track from the forthcoming album from REVEL IN FLESH. The song, entitled “Dominate the Rotten,” comes off the band’s forthcoming sophomore release, Manifested Darkness and is currently cracking skulls at this location.

Harnessing the momentum created by the album that Teeth of the Divine’s Erik Thomas called “the best of a recent impressive run of the style,” Manifested Darkness ups the ante and goes for the jugular. The album is sure to be considered one of 2013’s best classic Death Metal releases.

The CD and digital download will be unleashed on April 12th by FDA Rekotz and contains nine hammering new hymns of destruction plus one special bonus track exclusive to the CD version. The LP version will be out on April 26th and will include an additional bonus track. The artwork for Manifested Darkness was created by the Spanish artist Juanjo Castellano. The album was mixed and mastered at Unisound Studio by Dan Swanö.

Pre-orders are available at www.fda-rekotz.com. 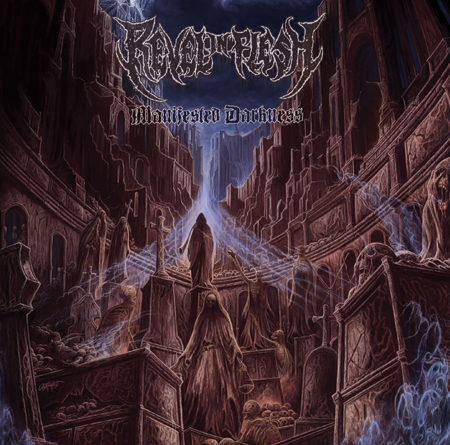