German death metal horde DEFEATED SANITY have completed work on their new full-length album. Titled Passages Into Deformity, the nine-track follow-up to 2010’s critically-lauded Chapters of Repugnance is scheduled for release on February 5, 2013 via Willowtip Records. Passages Into Deformity was recorded at Soundlodge Studios in Germany and includes guest vocal appearances by Frank Rini (Internal Bleeding), AJ Magana (ex-DEFEATED SANITY, Disgorge US), and Brian Forgue (Syphilic, Gutrot) with sound effects performed by Jon Engman (ex-Brodequin). Passages Into Deformity will be paired with a bonus DVD featuring making-of clips, interviews with the band, and performance videos.

Comments the band in a collective statement: “With Passages Into Deformity, fans can expect another quality release from DEFEATED SANITY. Without compromising the brutality of our sound, we have stepped it up in terms of the overall production. The album has a more old-school vibe to it, with a lot of early ‘90s inspired riffs and slams, but we made it a point to not get away from the technical and progressive stuff as well. People can definitely expect the most balanced DEFEATED SANITY album yet.” 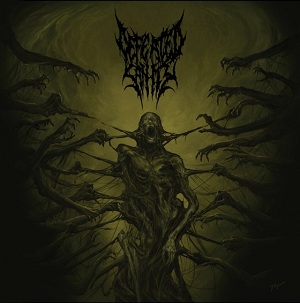