DEIPHAGO offer an exclusive stream of their brand-new album, Satan Alpha Omega, at Zero Tolerance magazine’s website! A highly exclusive stream from England’s premiere extreme music authority, DEIPHAGO‘s Satan Alpha Omega is out now through HELLS HEADBANGERS, and can be heard in its entirety for a limited time here: http://ztmag.com/exclusive.html 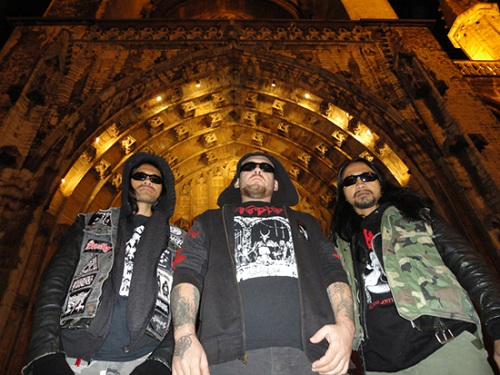 Once a cult name in the darkest metal underground but now rising to dominance as arguably the most violent ‘n’ extreme band around, DEIPHAGO recently received a 5.5/6 rating in the new issue of Zero Tolerance for their latest Satan Alpha Omega, winning that issue’s coveted “Release of the Issue” – with the review stating that Satan Alpha Omega “raises the bar and sets a new standard for the genre.” And so far, the international press is agreement about DEIPHAGO‘s latest ‘n’ greatest Satan Alpha Omega, as this latest deluge of critical acclaim is testament to:

•“Makes even most modern black metal look lightweight by comparison” – Exclaim!
•“Scraping the rim of the void and shooting right past” – InvisibleOranges.com [“Album of the Week”]
•“This album will crush you; this album will destroy your world!” – Destructive-Music.com [9/10 rating]
•“Deiphago prove their ability for those who are eternally loyal to the underground’s evil-infested auras, but anyone who has no place in the very depths of hell should stay away for their own good” – Lacerated Metal webzine [8.3/10 rating]
•“A fucking great record…a remarkably violent album, even if its violence is intelligently-meted” – MetalReview.com [8/10 rating]
•“A swirling mass of chaos…going to bring a smile to the face of old-school fans that grew up on a steady diet of SARCOFAGO, early SODOM, HELLHAMMER, and the like” – Metal Flows in My Veins webzine [B+ rating]
•“Listening to it is to be engulfed in a whirlwind cloud of sonic shrapnel…Not for the faint of heart, but I’m digging it” – NoCleanSinging.com
•“No other band does it better” – CanadianAssault.com
•“An insane devilish inferno” – Lordsofmetal.nl
•“An album that hurts the first couple of times through, but after a while, it’s blurred attack is exactly what Dr. Mephistopheles ordered” –Mouthforwar.net
•“Infernal nihilism in the flesh. A tantrum of Leviathan” – From the Dust Returned
•“Brash, chaotic, and violent” – Masterful-Magazine.com
•“Nothing else comes close to these guys as far as unrelenting carnal devastation goes” – OfferingMagazine.com
•“If there is a word or some sort of terminology to describe the whole album, it’s ARRRRGGGGHHHHHH!!! This is the end of the world coming disguised as an innocent CD release. Inside, detonations of a dirty bomb wait for you” – MetalAsFuck.net
•“Awesome…It’s black metal played at double-time and double-ugly” – Full Metal Attorney webzine
•“This makes much of extreme metal’s most extreme look tame by comparison” – TheMidlandsRocks.com
•“The only thing, really, to do is press play and hang on for dear life and see if you make it to the end…really does feel like the end of the world” –AveNoctum.com
•“Prepare for the aggressive firestorm that is Deiphago as they sweep the earth in their sacrilegious wrath” – NocturnalCult.com
•“The raw sound this band gets is unreal. This will suck you in and keep you there till the last note” – MetalcoreFanzine.com

Zero Tolerance is England’s most tastemaking metal magazine around – the first (and final) word on all things extreme and underground. Read it as you channel Satan Alpha Omega!