Las Vegas-based doomsters DEMON LUNG have now completed initial recording of their debut album at Sharkbite Studios, in Oakland, California. The album is currently being mixed by Billy Anderson at his studio in Portland, Oregon with an anticipated release late this Spring.

Las Vegas Weekly recently included DEMON LUNG on their Top 10 Local Bands To Watch In 2013. Drummer Jeremy Brenton confirmed to the newspaper that the album will be a concept about “the long begotten son of Satan, who’s been sent to earth to assemble the three parts of the devil’s bible so that we can speak the name of god in reverse and undo creation.” He adds, “when you say it out loud it’s pretty funny, but it’s some pretty epic sh*t.” 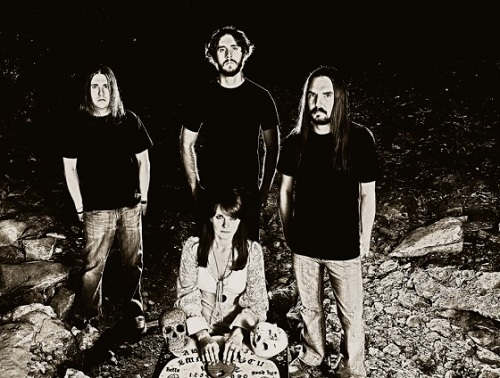 Candlelight announced the signing of DEMON LUNG on November 28th. The band features guitarist Phil Burns, bassist Patrick Warren, and vocalist Shanda Fredrick with Brenton. On signing with Candlelight, the band notes, “we are very honored to join the Candlelight roster. To be included among such talented artists is humbling and we thank them for giving us the opportunity.”

DEMON LUNG have been called “earthy yet horror-themed doom metal a la Candlemass,” by Metal Hammer. Ave Noctum noted, “DEMON LUNG has a deft touch and solid sound. Their music is clearly from the soul.” The band has performed alongside Pentagram, High On Fire, Jucifer, Witch Mountain, and Castle among others. The band has announced several Las Vegas-area dates upcoming including February 10’s performance at The Bunkhouse Saloon (supporting Castle), and February 16 at Cheyenne Saloon (supporting Gravehill and Avenger of Blood). More dates are expected.

DEMON LUNG released a video to their official YouTube page recalling their time in the studio with Anderson:

Hot News: Demon Lung – ‘The Hundredth Name’ out in June