DEMONA started in 2007 as a one-woman project in Chile with Singer/guitarist Tanza. After a couple of demo, the “band” started to get recognition in the underground circut and israeli label ISRAHELL BANGERS released the “NIghtmare” release on Cassette, while german IRON BONEHEAD released it as a 7″vinyl EP.
June 2011 saw Tanza moving to Québec, Canada where she recruited musicians to play live-show but also to give to DEMONA a complete line-up. After a line-up change, DEMONA is now composed of Tanza (Guitars/Vocals); Gabrihell (Guitars), Jeff (Bass) and Antoine (Drums). After intense rehearsals, the band recorded its full length album to be released on german labels DYING VICTIMS Prods (CD) and HEAVY FORCES (Vinyl) in March 2012.
Since then, the band has worked alot to improve & develop their own personal style of “speed-metal” that should for sure please all die-hard maniacs into bands like LIVING DEATH, VECTOM, ZNÖWHITE, SENTINEL BEAST to name a few…
The band has recently signed a deal with french label INFERNÖ Records (home of LADY BEAST, ELVENSTORM, AXECUTER, PRIME EVIL, DEATH RIDES A HORSE to name a few) and their new album “Speaking With The Devil” including 8 songs (+ intro/outro) will see the light of the day before the end of the year on CD/Digi-CD/Cassette & Vinyl ! To be also noticed, a die-hard version of the cassette will be release on german DESTRUKTION Records too ! Be ready for a new merciless SPEED METAL attack ! 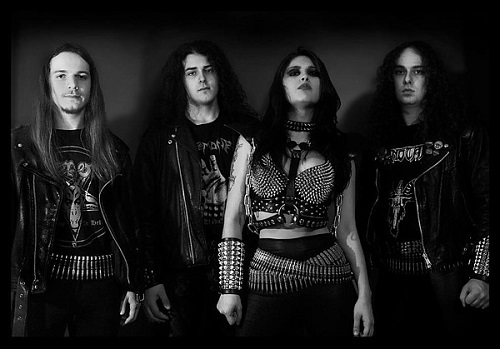 Two songs of the upcoming album are available for streaming on Youtube :

For more infos on the band > www.demonametal.com

DEMONA – Speaking With The Devil