Nekronos Promotion Hell is proud to announce the cooperation with Demonical Swedish death metal batallion. Without a doubt they are one of the best and most respected bands on their field, an honour to support them and spread word of their work across this Metal Universe!

Rui Gonçalves (RüPä), founder of this non-profit metal support agency comments:
“We are thrilled to announce our cooperation with Swedish death metal titans Demonical. I was first introduced to the bands work by a good Belgian friend back in 2008, since then this band never stop impressing me release after release. With another of our bands put on hold we got the chance to work with one of the best Swedish death metal bands of this days in my opinion! Look forwards to give our best and to raise some Demonical Hell”

Martin Schulman of Demonical comments on this news: “We are pleased to announce our new deal with Nekronos Promotion from Portugal. Been following the company’s impressive work for a while and we are confident that this collaboration will take Demonical one step further on the path to world domination”.

Demonical was spawned in March 2006 – by former Centinex members Johan Jansson (guitars & vocals), Martin Schulman (bass)and Ronnie Bergerståhl (drums) – with a mission to return to the roots of death metal and deliver a sheer dose of darkness and brutality.

The first audio assault – a four track promo attack entitled “Bloodspell Divine” – was recorded at Necromorbus Studios during July the same year. In November 2006 Demonical added vocalist Ludvig Engellau to the line-up – ’cause Johan wanted to fully concentrate on the six-string axe – and signed a worldwide multi-album deal with German Cyclone Empire.

The bands first full-length album, “Servants Of The Unlight”, was recorded at both Black Lounge and Necromorbus Studios during January and February 2007 and released in April the same year. In November 2007 Temple of Darkness released a limitedDemonical/Absu 7”EP featuring one track from the “Bloodspell Divine” promo.
In December 2007 the band parted ways with vocalist Ludvig Engellau due to musical and personal reasons. Demonical continued for a few months with various session vocalists until late March 2008 when Sverker “Widda” Widgren came on board as the new fulltime frontman.

In September 2010 Demonical once again entered Necromorbus Studios in order to record “Death Infernal”, their anticipated third full-length album. The album was recorded throughout the fall and released in Europe by Cyclone Empire (April 2011) and in north-America byMetal Blade (July 2011) as a limited digi-CD, regular CD and limited LP.

The album was praised by fans and media and climbed high at reader-polls in several magazines. During the fall 2011 drummer Ronnie Bergerståhl decided to leave the band due to scheduling conflicts and he was quickly replaced by Fredrik Widigs.

After “Death Infernal” was released the band decided to add a second guitarist for live situations. A few session members were used at several tours until Daniel Gustavsson joined as a full-time member during the summer 2012.

The first half of 2013 was spent at both Necromorbus and Wing Studios in Stockholm with the recordings of “Darkness Unbound”. After the recording a line-up change took place with Johan Haglund replacing Johan Jansson and Ämir Batar replacing Fredrik Widigs.

“Darkness Unbound” was released on September 20th 2013 and supported by a world tour. 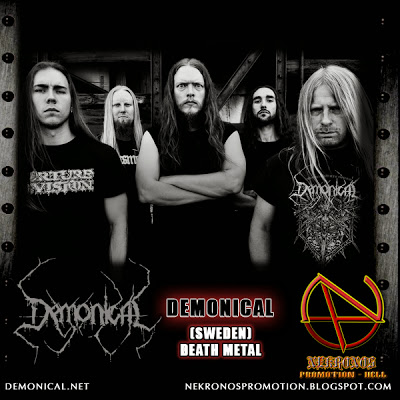