We are proud to announce the “Eastern Death Infernal tour“, a headlining DEMONICAL crusade running from October 26th to November 12th focusing mainly on the Baltic- and east-European territories.

It is with great enthusiasm we look forward to deliver some Swedish Death Metal Darkness for our loyal followers in Latvia, Lithuania, Poland, Slovakia, Romania, Bulgaria, Hungary, Czech Republic, Germany and Denmark.
Some of the shows (Warsaw, Budapest, Bucharest, Berlin etc) have already been published and promoted at various places, however, we will officially reveal all massacres when the entire crusade has been booked & confirmed.

Supports on the trek will be the fellow Swedish death masters VOLTURYON and the melodic extreme metal act SLYTRACT from Hungary.

As for further live news, one more battle has been added to the Spanish tour in October making it three in total. All updated details to be revealed soon. 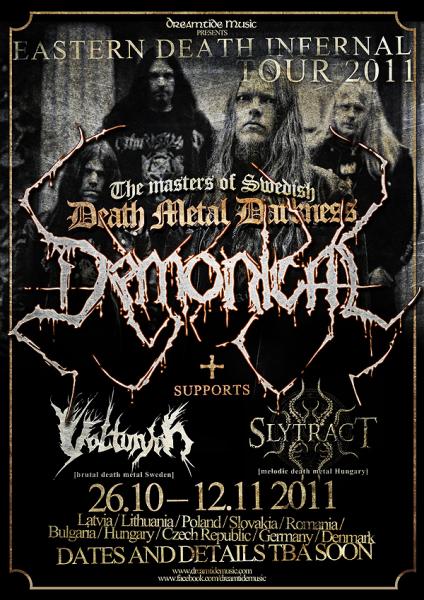