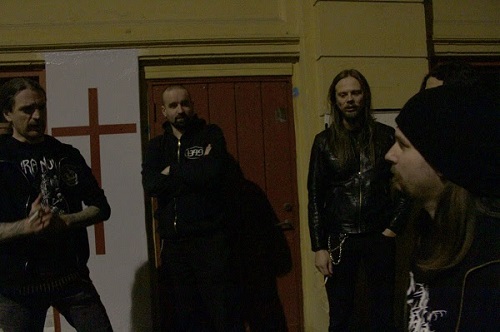 Norwegian Black Metallers DEN SAAKALDTE entered the studio on the 17th February to begin recording their new album.  Titled  “Kapittel II: Faen i Helvete”, it will be the band’s sophomore full-length album and a follow up to their 2009 debut “All Hail Pessimism”.   Commenting on what the fans can expect from the new album, the band said that the material was “diverse, sick, (c)old and grim”.  “Kapittel II: Faen i Helvete” will be released on Agonia Records later this year.

Also in February, a double LP gatefold edition of “All Hail Pessimism” is set to appear on Agonia Records in a limited edition of 250 copies.  The first 50 copies will be pressed in deep purple vinyl, with the remaining 200 copies in black.  The band  also recently went “Old School” with two of DEN SAAKALDTE‘s previous releases appearing on pro-tapes.  The 2008 demo “Øl, Mørke og Depresjon”  was released in a limited edition of 333 copies on the Italian label Bylec-Tum Productions, and the “All Hail Pessimism” album was released on the Inferna Profundus label in a limited quantity of 150. 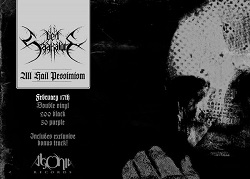 Formed originally as a one man project in 2006 by guitarist Sykelig, DEN SAAKALDTE recently announce the addition of frontman Einar “Eldur” Thorberg (FORTID, MIDNATTSVREDE, CURSE, ex-THULE)  to the lineup.  Aside from Sykelig on guitars and Eldur on vocals, the lineup also includes Andre Kvebek (PANTHEON I, ex 1349) on guitars, Seidemann (1349, ex-PANTHEON I) on bass, and Tybald (FORTID, ETHEREAL FOREST, HEATHEN DEITY) on drums.

DEN SAAKALDTE‘s next appearance will be at Revolver in Oslo, Norway, on the 31 May, when they will be presenting the new album.  More information about DEN SAAKALDTE can be found at http://www.densaakaldte.org/