Denver thrashers SILENCER will release The Great Bear on September 25th. The album is the group’s third full-length album and their first concept record. The band has this to say about the music of The Great Bear, an approach that took the band back to its heavy metal roots.

Silencer has followed a steady progression of thrash through the years, bordering on the extreme on recent releases. On this album we rewind to more 70’s and 80’s influences, aiming to bring a bit more rock back into metal without sacrificing any punch; things like big choruses and hooks as opposed to our previous works’ all out intensity and such. We were definitely influenced by concept albums such as Rush’s 2112 and Queensryche’sOperation: Mindcrime (among others) in putting together our story. This album musically is more denim, spikes, spit and vodka than anything we’ve done.

Conceptually, SILENCER takes a look at the U.S-Soviet space race of the 1950s/1960s and asks some “what if” questions.

Lyrically, we rewind back to space race era Soviet Russia, and we chose to take a fictional turn towards what would have happened if the Russians chose to one-up the American’s moon landing by going somewhere further. We tell the story from the Russian perspective, and try to capture the mentality of a union that could mobilize their entire population to achieve a goal, and also from the perspective of a member of this mission. This sort of story almost wrote itself, and its mood lent us to write some more straightforward yet very heavy tracks. It’s definitely more thematic than prior releases, but aims to get to the point and tell a large story fairly efficiently.

The Great Bear will be distributed by Vanity Music Group and will be available in stores, iTunes and Amazon MP3. Available physical formats are CD and limited edition 180-gram vinyl. SILENCER will be performing on select warm-up dates and are in the planning stages for tours following the album’s release. 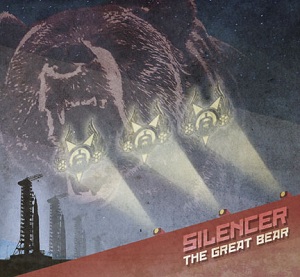 Formed in 1998, Silencer began their career on the strength of two self-released EPs Kozmos (2000) and Structures (2002). Built on a foundation of thrash, Silencer added increasing amounts of melody, intensity and high concept. Almost immediately these became highly sought after in the metal underground, as the band shipped copies box after box both domestically and overseas to independent distributors, boosted by a slew of strong worldwide ‘zine reviews. Many more copies were moved as a result of their heavy gigging schedule which saw them crisscross the western US several times, appearing at a number of signature metal festivals, and anywhere else that would let them plug in. Silencer’s first official release came in the form of Found on the Sun (2003), released by Italy’s Steelheart Records and earning the band its first real European distribution. After more domestic touring, the band moved to a five piece and began work on their first full length album entitled Death of Awe (2005), released on Mausoleum Records. The band further pushed their thrash roots to breakneck speeds on this release, signifying the largest step yet in their progression. Another western US run later, the band regrouped to write the follow-up. Equally dense and furious as the prior release, the band focused on a more epic delivery of their now very cutting edge thrash sound. In early 2009 Divisions was released on F-Bomb Records. Metal Hammer’s revered Malcolm Dome wrote about Divisions, “Silencer have learnt the cunning art of writing songs with a purpose. There’s still life in thrash”. Now after another musical evolution and a lineup change that reverts the band back to a familiar four piece, Silencer rewinds the influence clock a few decades back and tackles their first concept record. Musically more direct than previous album, The Great Bear releases worldwide September 2012.