The new album, entitled ‘Cemetery Sickness’, will be released on 26th June 2014 via Metal Age Productions.

Comments vocalist/guitarist Ollie Jones: “There is no particular theme to this album but several of the songs are set in the graveyard. We’ve tried to hit the gore and perversion extremities that we’ve touched on from the start of the bands career but now we are playing better than ever.”

In relation to previous album ‘Forensix’, ‘Cemetery Sickness’ is more of the same only better and in terms of production… “We’ve gone for a natural drum sound and generally keeping it old school as that’s what we are fans of.”

‘Cemetery Sickness’ was recorded at Sonic Forge Studio, Cardiff, Wales and was produced by Joe Thompson. Jumali Katani who is known for his work with Scent Of Death & Thy Art Is Murder amongst others undertook artwork for ‘Cemetery Sickness’.

Check out the title track at this location: https://www.youtube.com/watch?v=3BqLkta8PDw 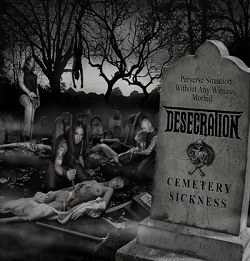 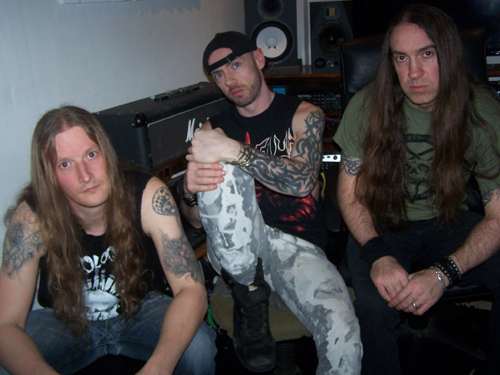 Formed in 1993, Desecration hit the headlines almost immediately with their debut album ‘Gore & Perversion’ (1995), which was immediately banned upon release. The artwork and lyrics led the band to their arrest under the Obscene Publications Act. A one-year court case was eventually dropped but they were warned to ‘tone down’ in the future. Naturally, after lying low for a short period of time Desecration hit back, this time with a new album entitled ‘Murder in Mind’ (1998). The band also penned a track for this album titled ‘A Message To The Censors’.