French Thrash/Death outfit DESTINITY have revealed an album teaser with some new tunes off the upcoming album “Resolve In Crimson” and some first impression on the album artwork, which was handled by Strychneen Studio. DESTINITY‘s new album “Resolve In Crimson“, which was again produced by Jacob Hansen is set to be released on November 19th in Europe and a day later in North America. 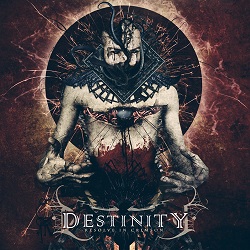 You do not necessarily have to look to Scandinavia to find angry yet catchy metal in between Death and Thrash. DESTINITY out of Lyon, France are best known for playing an agile sound that is aggressive and melodic at the same time. Quintet’s attitude towards its metal has to be characterized as modern and intelligent. “Resolve In Crimson” proofs this right and marks band’s third record for LIFEFORCE RECORDS – their sixth full length since forming in 1996.

DESTINITY tighten their strengths when they are creating nine anthem-like songs that are based on remarkable hooklines, great riffs and melodies and well-balanced songwriting. Equally important: the French musicians pay attention to the technical aspect of their metal and appear as focused and versed as casual and coltish. If you have been impressed by the fresh approach of “11 Reasons To See” (2010) you will be even more pleased with the mature musical sense DESTINITY are demonstrating with “Resolve In Crimson”.

DESTINITY played about 300 concerts around Europe and have been part of tours with DEW-SCENTED, SEVERE TORTURE, DECAPITATED, ENTHRONED, and AGATHODAIMON.

For more information check the band’s website at: www.facebook.com/destinity66

Hot News – Destiny to be on tour pretty soon