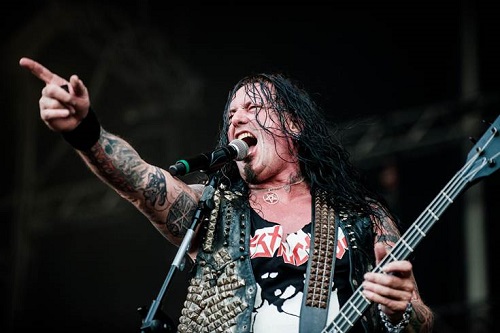 After taking part in this years’ Rock In Rio Festival, German Thrash Metal veterans DESTRUCTION reminisce on what will definitely stick out as a highlight of their long lasting carrier. The legendary mega event started in 1985 with top acts like QUEEN, AC/DC, THE SCOPIONS, IRON MAIDEN and many more, playing in front of 1, 3 million visitors. The following events Rock In Rio II and Rock In Rio III took place with a ten years between them – in 1991 and 2001. In 2004 the festival relocated from Rio de Janeiro to Lisbon and in an additional version in Madrid. For its tenth anniversary, Rock In Rio returned to its roots. This years’ Rock In Rio, which was again held in the Brazilian capital, saw another brilliant line-up featuring SEPULTURA, IRON MAIDEN, METALLICA and of course DESTRUCTION. Front force Schmier (Bass, Vocals & Hate) commented stunned:

“The air was clearly filled with tension before our appearance at the biggest and most renowned Festival of our time. In Brazil and even all of Latin America this event brings along giant media coverage, in a way I’ve never seen before. During an entire week all performances are aired live on TV, newspapers feature specials and cover stories, soda cans have special printings on them and everybody is only talking about the festival. The pride of the whole nation is focused on Rio during these nine days! Even soccer is second string for this period and we all know how important it is to Latin American countries! Even for ripped-off geezers like us there are still highlights to come and Rock In Rio festival with its fan euphoria (at the airport there were fans jumping at your every other moment) was a sensational experience. Before it we’ve already spend a week in South America getting ready and we were hot! The show, were our Brazilian buddies of KRISIUN supported us as guests, was just as insane as one imagines it to be with this kind of magnitude in Brazil. Several huge circlepits and tens of thousands of fists in the air celebrating the German Thrash Metal as if we had reinvented it! Total madness!  When I come to look back on my carrier someday, Rock In Rio will stick out as one of its highlights. Having the people go nutts because of the event for almost a week, in a way that is only possible in Brazil: Pure joy of life and euphoria together with the ferocity of the latinos!

Just terrific! Thank you Brazil for having us experience this, the craziest fans on earth definitely live in Latin America!!!”

DESTRUCTION’s most current record »Spiritual Genocide« was released on November 23, 2012 via Nuclear Blast.

Az Overkill, a Destruction és a Flotsam and Jetsam is játszik a 2019-es Killfesten

OverKill, Destruction, Heathen, After All – Koncertbeszámoló

DESTRUCTION – The Curse Of The Antichrist – Live In Agony