Details of “…And The Seventh His Soul Detesteth”, the new album from Dark Metallers AETERNUS, have just been revealed. The ten-track album, which will be the band’s seventh full-length release, will first appear as a limited edition which will include AETERNUS’ classic 1995 debut EP “Dark Sorcery” as a bonus, and is set for release on Dark Essence Records on the 18th March world-wide (except for Norway, Germany, Austria and Sweden where the album will appear on the 22nd March).

Formed in Bergen, Norway in 1993 by guitarist and frontman Ares, AETERNUS has re-emerged seven years after the release of their last album “Hexaeon” with a new line up that comprises Ares on guitars and vocals, Phobos (GRAVDAL, MALSAIN) on drums and Specter on guitars. One of the pioneers of what the band calls “Dark Metal”, AETERNUS’ sound combines features from both Black Metal and Death Metal with superlative guitar playing and occasional haunting, melodic interludes.

“…And The Seventh His Soul Detesteth” was produced by Bjornar E. Nilsen (VULTURE INDUSTRIES, BLACK HOLE GENERATOR) at the Conclave and Earshot studios in Bergen. All music is by AETERNUS, concept and lyrics by HELHEIM’s V’gandr. Artwork is by Timo Ketola, known for his work with bands such as for DEATHSPELL OMEGA, ASPHYX, DISSECTION MARDUK, WATAIN and OPETH amongst others, band photos by Christine Ristesund. The bonus EP, “Dark Sorcery”, was recorded, mixed and mastered by Cato Langnes at Hindu Lyd in 1995 and produced by Aeternus. Lineup on“Dark Sorcery” is Ares on guitars and vocals, Erik (Vrolok) on drums and Ørjan on bass. All music and lyrics by Ares. 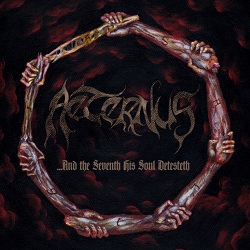 Track listing for “…And The Seventh His Soul Detesteth” as follows:

1: There Will Be None
2: …And The Seventh His Soul Detesteth
3: Spurcitias
4: Ruin And Resurrect
5: The Confusion Of Tongues
6: Hubris
7: Reap What You Saw
8: Saligia
9: The Hand That Severs The Bonds Of Creation
10: The Spirit Of Illumination

Fan-filmed footage of AETERNUS at the Hub& Huey Festival in May 2012 can be seen at http://www.youtube.com/watch?v=QO4gc7CLpy0