With a release date set for early December 2012, BLODARV have today revealed the track listing and artwork for “Gâst”, the fourth full-length album from the veteran Danish Black Metallers. The eight-track album will be released in two versions on Self Mutilation Services – regular CD format and a limited edition in A5 format which will feature different artwork. Both versions come with a 16 page booklet which includes lyrics. Limited edition merchandise will also be available to mark the release. All artwork for “Gâst” is done by the blasphemer himself – BLODARV founder and frontman HUGIN. The recording, mixing and engineering were all done by HUGIN at his HammerArt and Studios, where the artwork was also produced, and which is located on the frontman’s home island of Bornholm. Tracklisting for “Gâst”, which will run for 45 minutes, is as follows: 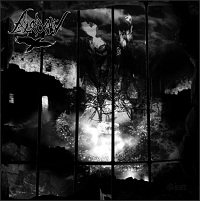 1. Indelukket
2. A Snowy Night In November
3. I Blaek Og Blod
4. Korset Paa Baalet
5. The Heart Of Art
6. Lonely Journey
7. Surrounded By Dust
8. Into The Halls Of Orion

In the Bornholmsk (Burgundian) dialect of Bornholm a “Gâst” is a type of a ghost demon or energy that possesses a mortal and inspires them in much the same way as a muse, with visions, stories, smells, sounds, emotions and pictures. Commenting on the album, which is a powerful blend of BLODARV’s mid-tempo black metal spiced with both fast and slow tracks, Hugin had this to say: “It’s fitting that the release of “Gâst” will take place in winter, when the winds howl and the snow blankets the island of Bornholm, creating the perfect setting for an album that explores life philosophies, death, the micro and macro cosmos, and the forces of nature and power of the universe and all the energies that cling to it. Like our previous releases, the album contains a mix of tracks in both Danish and English, and is a piece full of hateful blasphemous poetry, dark visions, possessive muses, and soul-seeking demons”. 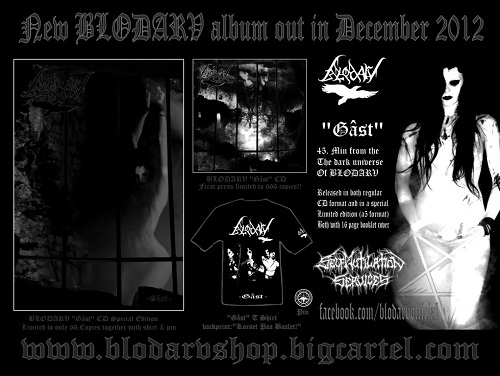 The lineup on “Gâst” comprises BLODARV core members HUGIN on vocals, bass, guitars and effects, SATINAE MA on female vocals and PESTILENS on lead guitar. Session studio drums are by YNLEBORGAZ . BLODARV’s line up has just been expanded with the addition of FJORGYNN on drums whilst live bass is handled by session member HUUL. BLODARV’s next live appearance will be on the 1st December with HORNED ALMIGHTY at the Club Brutal in Arhus, Denmark. They have also been confirmed to appear at next year’s Kvlt Fest which will be held on the 1-2 March in Odense. More information about BLODARV can be found on the band’s Facebook page at www.facebook.com/blodarvofficial

“Surrounded By Dust” a track from “Gâst”, together with tracks spanning BLODARV’s 14-year career can be heard on the band’s SoundCloud player at http://soundcloud.com/blodarv/sets/blodarv