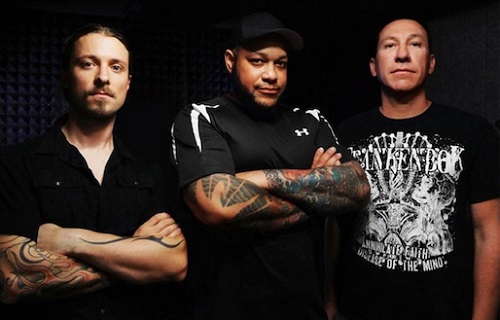 DEVIL YOU KNOW, the creative union of former KILLSWITCH ENGAGE vocalist Howard Jones, ALL SHALL PERISH guitarist Francesco Artusato and DEVOLVED drummer John Sankey, have not only finished tracking their highly anticipated debut for Nuclear Blast Entertainment, but they are also gearing up for their first round of live performances in early 2014.

Beginning on February 22 in Brisbane, Australia, DEVIL YOU KNOW will join the world renowned Soundwave Festival Tour performing alongside the likes of ROB ZOMBIE, FIVE FINGER DEATH PUNCH, and AVENGED SEVENFOLD. It will also mark the addition of guitarist Roy Lev-Ari and BLEEDING THROUGH bassist Ryan Wombacher to the band’s lineup.

“After a period of being so intensely creative writing and recording the album, it’s exciting to finally take it out on the road,” says Jones. “It’s great to have the two new guys. Roy is a great fit. Ryan and I have played tons of shows together in BLEEDING THROUGH and KILLSWITCH and have known each other for years.”

Produced by Logan Mader (FIVE FINGER DEATH PUNCH, GOJIRA), DEVIL YOU KNOW’s inaugural effort is presently being mixed by none other than acclaimed producer and mixer, Chris “Zeuss” Harris (HATEBREED, CHELSEA GRIN). “It’s the record I’ve waited my entire life to make,” states Artusato. “Logan really pushed us and brought the best out of us and now Zeuss is making it sound amazing!”

Artwork for the album is currently being finished up by noted painter and illustrator Travis Smith (OPETH, KATATONIA, DEVIN TOWNSEND).

“The stage is really being set for something incredible to happen” says Australian born drummer John Sankey. It was Artusato’s musical collaboration with Sankey (also a collaborator with FEAR FACTORY) that caught Jones’ attention in late 2012 when demos were passed through mutual acquaintances. Based on the strengths of the two musicians’ efforts, Jones emerged from a two-year hiatus following his decade-long tenure fronting KILLSWITCH, during which the Massachusetts metallers racked up two gold records and a Grammy nomination.

DEVIL YOU KNOW’s self-titled album is presently tentative slated for a March/April release in 2014. In a time where most hard rock veterans are missing the mark, expect DEVIL YOU KNOW to dominate plenty of Top 10 lists in the coming year.

A demo version of a brand new song called ‘Shut It Down’ can be streamed at the band’s Facebook page www.facebook.com/devilyouknowofficial or the Nuclear Blast YouTube channel at http://www.youtube.com/watch?v=0C17On6h3HQ.