Polish blackened death metal upcomers DEVILISH IMPRESSIONS have revealed the first track off their upcoming album “Simulacra” due to be released July 30th in Europe and on July 31st in North America. The track entitled ‘Icaros‘, which also the first track on the album, can be found under the link below:

Despite having only two albums under their belt DEVILISH IMPRESSIONS quickly managed to put their name out there. Critically acclaimed records and intense touring along with some of the biggest names onto the metal scene made them one of the most promising acts on the European map of extreme music. After a row of personal problems that eventually caused several line-up changes and temporary stage absence, the band strikes back with the brand new opus called “SIMULACRA” and is now ready to take the scene by storm again. 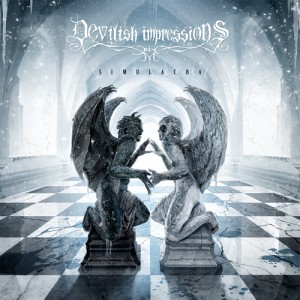 For more information check the band’s website at:
www.devilish-impressions.com