Today Relapse Records delivers a brutal blow with the first full track from Conceived In Sewage, the pending fourth LP from gorestrewn death metal mongers, DEVOURMENT. The rabid new lyric video was cut-up for the album’s second track, “50 Ton War Machine,” the loving anthem boasting peaceful imagery, such as “Corpses burning, cities falling, the tide is turning, shadow consumes” and “rise, of the once forsaken, from the depths where souls are taken.”

The Dallas-based DEVOURMENT horde has also sanctioned new live actions across the country to add some putridity to the Spring months. In March they’ll invade Brooklyn for a one-off with Internal Bleeding and Malignancy, on their way to Philadelphia to take part in The Philthadelphia Infest 2013 in Philly alongside Brutal Truth, Phobia, Master, Malignancy, Embalmer, Cannabis Corpse and more. In JuneDEVOURMENT will barrel their way into the Las Vegas Deathfest alongside Defeated Sanity, Regurgitation, Infernal Dominion, Embalmer and others.

Captured at Mana Recordings in St. Petersburg, Florida with Erik Rutan (Hate Eternal, Morbid Angel), Conceived In Sewage proves to be DEVOURMENT’s most eviscerating release yet, gushing with over thirty-three minutes of the band’s hate-fueled brutality. The record will see release on February 19th in North America, February 22nd in Benelux, Germany, Austria, Switzerland and Finland, and February 25 in the UK and rest of the world. Recently, several merch package preorder options and digital preorders were made available. The “50 Ton War Machine” single is also now available at iTunes. 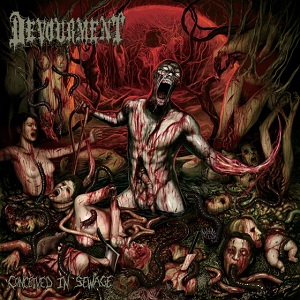