Surf over to www.metalblade.com/dictated to check out the artwork and stream the first single “No Mercy for Cowards“! While being there feel free to pre-order your personal copy of “The Deceived“!

Comments DICTATED: “No retreat or step back! Check out ‘No mercy for Cowards’ from our upcoming album ‘The Deceived‘! Get ready to pre-order soon!” 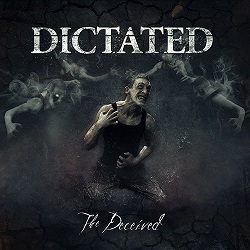 DICTATED history:
Once upon a time, the furious female guitar tandem Yessica Otten and Sonja Schuringa stumbled upon Michiel vd Plicht and Henri Sattler during a heavy drinking session. While Henri was hustling to sell the girls one of his custom-made SK Guitars they managed to talk business in creating the new DICTATED album.

On that very same night, vocalist York picked up the sense of success and after another night in the Irish pub, he was there to stay.

Forces joined together, the five of them took over the rehearsal rooms and Henri enslaved the others into writing at their utmost. Ten new songs were born with the help of an overload of sweat, beer and coffee.

In September 2013, DICTATED took over Studio Soundlodge for the recordings of their new album “The Deceived“. In the meantime, various hilarious photo-shoots took place where friends and family of DICTATED found themselves back mutilated in the artwork.

Humor, some serious questionability of the sane mind and above all, determination and willpower produced the new story of DICTATED and “The Deceived“.

As know to their fans, DICTATED is ready to hit the stages again. To dominate every venue with their live performance, just like their European tour with Origin in 2012.

Dictated – “This Is to All” (Official video)