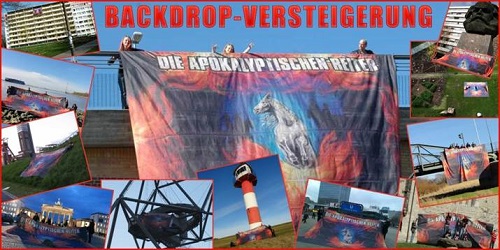 DIE APOKALYPTISCHEN REITER are already known for their engagement for worthy causes such as Naturvölker e.V., now the German fivepiece joined in with its fanclub to support PROJECT BLUE SEA by auctioning one of their backdrops.

To receive as much attention as possible, the fanclub members are busy taking and sharing pictures of the backdrop and themselves all over the country.

“We want to be seen. That’s why we’re also using public places like the War Memorial in Leipzig or the Brandenburger Tor in Berlin, but also bridges in rural areas.

The backdrop is a real eyecatcher and the bandname adds to this.”

The PROJECT BLUE SEA is a German Environmental Protection Agency focusing on saving all animals living in and around the ocean and also taking care of the increasing waste issue ads well as further educational work to save and protect the oceanic ecosystem.

The new album by DIE APOKALYPTISCHEN REITER called »Tief.Tiefer« will be released on May 30, 2014 via Nuclear Blast.

You can pre-order your copy at this address: http://smarturl.it/ApoReiter-Tief

Hot News – Die Apokalyptischen Reiter Will Release A Best Of Album „The Greatest Of The Best“!