“Hyperion Under Glass“, a first extract from the sixth DIRGE album is now streaming on SoundCloud. 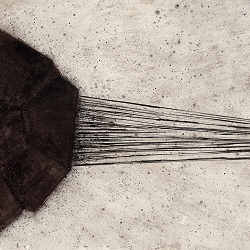 This mind-blowing new record is an incredible listening experience. Immense, colossal and yet deeply emotional all at once. As usual, DIRGE collaborated with several other talented guests:Milena Rousseau (MIRODA), Nicolas Dick (KILL THE THRILL) and Tara Vanflower (LYCIA).

According to American Aftermath, “This band is phenomenal in every aspect (…) DIRGE are amazing.That is all ! (10 out of 10)”

“Hyperion” will be released on March 14th (April 15th in North America) in Digipack CD, Gatefold 2×12″ LP and Digital Download.

Pre-orders are now taken at the following location. A bundle offer with both is also available at cheaper price. 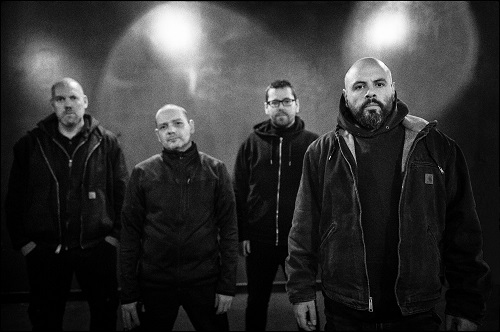 Twenty years divide “Infected Brain Machine“, DIRGE‘s first demo, and “Hyperion“, their sixth album. First inclined to industrial textures somewhat similar to Godflesh, mixed with a touch of 90’s noise (still significant on the inaugural “Down, Last Level“, 1998), the band widens its sound palette at the turn of the 21st century. Less mechanical and more organic, heavy and stifling atmospheres follow the lines of corrosive guitars that subsequently become the core of DIRGE‘s music. Predating a genre that would later be christened as post-hardcore or post-metal, the second album, “Blight and Vision Below a Faded Sun“, is released in 2000.

Recorded during the spring of 2003, “And Shall the Sky Descend” follows one year later. If guitars remain the cornerstone of the four long pieces that build it, the extremely decelerated tempos, creeping samples, violin, didgeridoo and female vocals (Von Magnet’s Flore) present the result of three years of musical evolution towards more mesmerizing and psychedelic horizons.

In 2007, the band gives birth to “Wings of Lead over Dormant Seas“, an immersive double album in which ambient and tribal power stand alongside massive riffs and industrial volutes, haunted by the deep voice of Kill The Thrill’s Nicolas Dick on the one hour title track.

In April 2011, DIRGE injects ethereal brightness, lethargic cold and melodic breath within the telluric riffs running through its fifth release, the warmly acclaimed “Elysian Magnetic Fields“. For the album, the band embarks on tours from Portugal to Russia, including stops in Germany, UK, Poland, Hungary, Czech Republic and Latvia, among others.

2014 is the “Hyperion” year. Released through the first-rate French label Debemur Morti Productions (Blut Aus Nord, Rosetta, Year Of No Light…), it draws the cold and ethereal vein of “Elysian Magnetic Fields” out, between hazy melancholy and movement variations, powerful as well as progressive. The various keys of vocals (Lycia’s Tara Vanflower is featured on one track) serve wide-ranging compositions, both profound and bright. With “Hyperion“, DIRGE signs its most daring and iconoclast work to date.