As previously announced Metal Mind Productions will release Doogie White’s debut solo release this Autumn. The album called “As Yet Untitled” is a collection of 10 dramatic and hard hitting rock songs co-written by White and some good friends he has made over the years on the rock scene. Track “Time Machine” promotes the album and is now available to stream on THIS site.

Doogie White: “‘Time Machine’ was written by Paul Logue and myself. I was having my Dr Who moment. If you could go back what would you change? I try not to have dirt on the back of my shoes or dwell on the past, but I guess we all have moments when we think ‘What if?’ Bridges get burned, some get rebuilt and some just get carried by the river to the sea and float away never to be seen again. But if you could relive that moment, that secret special moment, just for one day, how magical it might be?”

This Scottish vocalist came to the attention of the worldwide audience when Ritchie Blackmore asked him to be the lead singer in his reformed Rainbow. They recorded one album together – “Stranger in Us All.” Doogie would go on to sing with Swedish neo-classical guitarist Yngwie Malmsteen for over a six and a half year period, record two albums and tour the world. He also recorded four albums and toured with Cornerstone and is currently the lead singer of Tank.

The album was recorded at various studios in Florida, Germany, and Scotland but most of the production was handled in Sweden with Pontus Norgren (Hammerfall) at the helm.

Metal Mind Productions set the release date for the 24th of October in Europe and the 8th of November in USA (via MVD).

Doogie White
“As Yet Untitled” 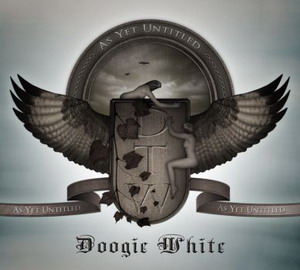