“Granite”, the first album by Doogie White & La Paz will be released in a week time, on February 13th (in US on March, 6th). Track “Just For Today” promotes this unique album and is available to stream in THIS location.

Doogie White: “’Just for Today’ was the first of three brand new songs and the first one we wrote together after a number of years for the album. The chorus wrote itself really. I wanted to keep the lyrics and melody in the style I did with La Paz. I think we captured it very well.
I thought back to how my world was back then… It was surprisingly easy. It’s just about bumping into an old girlfriend and saying sorry while still trying it on. Love the arrangement and the Hammond on the chorus really gives it a lift. A simple but heartfelt wee song.”

La Paz were formed in Lanarkshire, Scotland in the summer of 1984 by Chic McSherry (guitars), Doogie White (vocals) and Alex Carmichael (bass). At the first rehearsal together they hit it off immediately on a personal level – they also liked the same music and they had the same influences and heroes (Purple, Rainbow, Journey, Gary Moore) so they started to recruit other members to try to form a band and go do some gigs. Andy Mason (keyboards) joined the trio and he fitted in from the start, even though he was still at school when he joined. Drummers were always a problem and, over the life of the band, La Paz went through almost as many as Spinal Tap. Unquestionably the loudest and the most accomplished was/is their current drummer, Paul McManus. La Paz played live regularly, sometimes playing up to a hundred gigs in a year. They played the world-famous Marquee Club in London as well as at some festivals in Milton Keynes and they were featured regularly in Kerrang! (Derek Oliver becoming a big fan of the band) and attracted interest from a number of UK and US record companies, finally agreeing terms with one of them for a three album deal. But it was not to be – for reasons which were never explained by the record label the deal fell through at the very last minute. Sadly the band didn’t survive for very long after that. They did their last gig on 15th October 1988 and then Doogie moved to London to join Midnite Blue, Ritchie Blackmore’s Rainbow, Cornerstone, Yngwie Malmsteen and now the mighty Tank. And then legendary DJ Tom Russell of 96.3 Rock Radio called Doogie and asked him if he would do some acoustic numbers at The Garage in Glasgow for Rock Radio’s Birthday Bash in January 2008. Doogie agreed and asked Chic to play guitar. It was a big ask after 20 years: almost 1000 people, Doogie singing alone and Chic with one flamenco guitar! “We had such a blast though and it woke up so many great memories in both of us that we decided to give it a go with the full band for my 50th birthday” said Chic.
And so the full band started to rehearse and it was clear that they could still play a bit. The band just gelled: just like old times and the gigs were a terrific success. And so the idea of re-recording some of the favourites from the set that had never had a proper production job was conceived.

“Granite” is an album with its roots in the past but its energy in the present. Metal Mind Productions will release “Granite” on 13th February 2012 in Europe and 6th March 2012 in USA (via MVD). 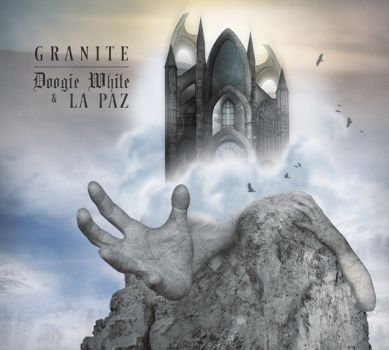 DOOGIE WHITE – As Yet Untitled

Hot News – Doogie White on the set of Kruk’s video