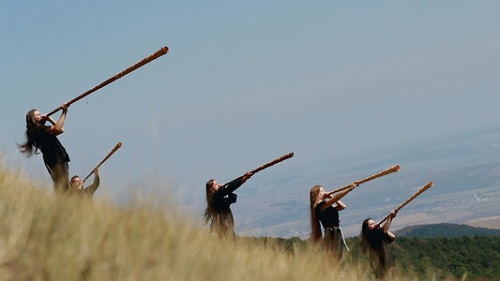 Today we are delighted to present the first video clip of Dordeduh! The song “Dojana“, taken from the band’s debut album “Dar De Duh” (out September 28), has been visualized by the musicians and director Costin Chioreanu inimitably, and the outcome once more emphasises Dordeduh‘s artistic uniqueness.

Edmond/Hupogrammos comments on the video:
“Finally the first video of Dordeduh is out. For the setting we chose an old, quite unknown Dacian fortress, placed deep into the Apuseni mountains. The place is surrounded by an unusual forest, called locally ‘the forest without a face’. This place was the subject of many mysterious stories of people disappearing into the forest without a trace. Fortunately during the shootings nothing unusual happened.
We are very happy with the final result and Costin Chioreanu did a great job. Enough describing; we let you to enjoy it!”