On September 24th The Gloomy Reflections of  Out Hidden Sorrow, the debut from Mexican death metal masters CENOTAPH, will be made available for the first time ever on vinyl through Chaos Records. Originally recorded in May of 1992 by Hans Mues at Estudios Tequila in Mexico City, this vinyl reissue has been fully remastered by Roberto Granados at Seismic Sound Studios. The album comes as a double LP with gatefold jacket and exclusive poster and features original artwork by olish artist Ryszard Wojtynski. Remastered versions of the band’s Tenebrous Apparitions 7″ and The Eternal Disgrace 7″ are included as well. This one-time pressing is limited to 500 copies (100 brown, 100 orange and 300 classic black).

Pre-orders are available at this location. 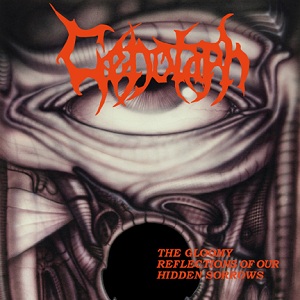 “This is a classic death metal masterpiece that deserves to be heard by more people. It’s great that this crusher is getting out there and having another chance to plague humanity again with its repulsive sound! HAIL THE MIGHTY CENOTAPH!”
– Mike Abominator {GRAVEHILL/MetalManiacs.com)

“Buried and never forgotten, the debut album of Mexico´s CENOTAPH, is finally bring into glory for the new generations to succumb into the asphyxiating aura of darkness and death that the deepest emotions within mankind hinders…lurking in these deathblast of graven images, lies some of the deadliest death metal composition ever created in the land that celebrates the dead…the evoked doom is here…” – Julian Nuñez (Horrible Fanzine)

“Without a doubt, a lot a great Death Metal albums and demos came out from Mexico in the late 80’s-early 90’s. But when talking about groundbreaking releases. In my personal opinion, they were a few: TOXODETH “Phantasms” demo ’88, HARDWARE “Cyber Death” demo 1990, and CENOTAPH “The Gloomy Reflections of Our Hidden Sorrows” 1992″ – Tony Juarez (Reborn From Ashes ‘zine)