Violence and the Macabre, the first full-length offering from Philippines-based brutalists DOWN FROM THE WOUND in seven years, is now available on Comatose Music.

Preview and purchase the album at www.comatosemusic.com.

After signing with Comatose in October 2012, DOWN FROM THE WOUND went  to work on the follow-up to their 2007 debut, Agony Through Rituals of Self Purification. The results see the band return with 50 minutes of flesh-shredding Southeast-Asian brutality with old-school atmosphere and organic production. DOWN FROM THE WOUND are no strangers to the death metal scene; they have been punishing eardrums since 2002 with their nasty combination of inhuman breakdowns and technical riffing reminiscent of bands like DISGORGE, GORGASM and LUST OF DECAY. 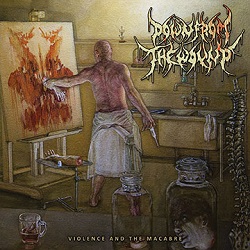 “The perfect way to start 2014. Relentless and raw tunes from a band that honors Philippines and its extreme scene in the best way. Fuck Christmas and decapitate Santa. This year sets off brutal… Yeah!” – Brutalism.com

“Want to get your ears wrapped around some tasty, slamming Death Metal played well and executed like only true fans of the genre can? Look no further.” – Wonder Box Metal

Hot News: Down From The Wound – “Ill-Fated Annihilation” Now Playing at GunShyAssassin.com

Hot News: Down From The Wound to Release “Violence and the Macabre” February 4 on Comatose Music