The new DRAGONHAMMER album “The X Experiment” is almost ready to be released via My Kingdom Music and it’s already announced as one of the most awaited Italian releases of the end of the year!

The album, according to what the band says, is an explosive mix of Power, Epic and Progressive Metal in the real DRAGONHAMMER tradition and style, and is based on a great futuristic concept, a modern fantastic story set in a post-nuclear world where chaos reigns and humanity does not believe in anything…

A sample of “The End Of The World”, featuring Roberto Tiranti vocal performance, can be heard at this link: http://youtu.be/rTfaHhoTruE

Here are the 9 tracks composing “The X Experiment”: 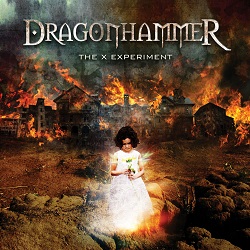 “The X Experiment” will see the light on December 2nd on My Kingdom Music and distributed world-widely.