California death metal trio DREAMING DEAD are readying to unleash their long-awaited new full-length entitled Midnightmares. The follow-up to their 2009 Within One opus, was recorded from June through September of this year. All guitars and bass were tracked at the band’s own studio in downtown Los Angeles while the drums and vocals were tracked at Architeuthis Sound, (where Midnightmares was also mixed). The final product is nothing short of immense. Midnightmares offers up nine tracks of crushingly elaborate death metal anthems as led by band leader, vocalist and guitar priestess, Elizabeth Schall.

DREAMING DEAD have continued their ascent to the mightiest of metal’s ranks with their sophomore release, Midnightmares. Retaining many of the extreme metal elements of Within One, Midnightmares showcases a more refined DREAMING DEAD, playing with greater precision and offering an even deeper and more provocative musical experience.

As an added bonus, Midnightmares features cover art by renown metal artists Travis Smith, known for his striking work on records from Death, Sadus, Katatonia, Opeth, King Diamond and so many others.

Commented Schall and Mike Caffell (drums, vocals), of the release: “With Midnightmares, we wanted to record an album based around the concepts of night and, obviously, nightmares. We shaped our lyrics as such, and wrote music to capture both the violent, chaotic nature of dreams and the quiet tranquility of the night. We also crafted the album to flow as a whole, symbolizing the progression of an evening into night, and then into dawn; as if the songs couldn’t exist without one another. And, yes, we’re still bringing the speed and brutality.” 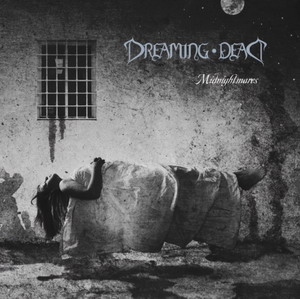 Members Schall, Caffell and bassist Juan Ramirez have honed their characteristic aural assault of black metal, death metal, and thrash on a nationwide basis for the last four years, sharing the stage with the likes of Morbid Angel, Nile, Immolation, Krisiun, Monstrosity, Master, and Dying Fetus. This Midnightmares-era sees DREAMING DEAD sowing the seeds of such time spent on the road, and those picking up the new album or catching the band live will no doubt be struck at how much further DREAMING DEAD have taken their groundbreaking metal stylings.

Midnightmares will be released on October 31, 2011 as a digital download via the band’s official WEB SITE. Stay tuned for further details. In the meantime, check out the demo version of the title track at THIS LOCATION.

In related news, Schall recently demoed Roland’s new CUBE-80XL amp. If you missed it the first time, check out the video HERE.