“Photographs”, the new video from Swiss modern melodic death metallers  DREAMSHADE, can be seen below.

The song comes off the band’s sophomore album, “The Gift Of Life”, which will be released on January 25, 2013 via Spinefarm. The CD was mixed and mastered by Jacob Hansen.

Says they band: “The idea behind the song ‘Photographs’ is very simple. It is about all those childhood friends who now disappeared from your life. You used to be close friends, but time passed and now you can barely recognize each other… or you pretend not to. You cross each other and you just look away: nobody is strong enough to say hi.”

“We wanted to insert this concept in a song because it’s something people live every day. It’s a feeling you just can’t ignore.”

“We went to Wroclaw (Poland) to shoot the video with Grupa13 (an awesome local video company who did videos for BEHEMOTH,DECAPITATED, KREATOR, SONATA ARCTICA and many other cool artists) and they definitely did a great job! The location they found was perfect, they are real professionals and turned out to be also good fellas! We really had a great time. Another video for the upcoming album has been shot with them and we’re sure it is going to be ridiculously awesome.” 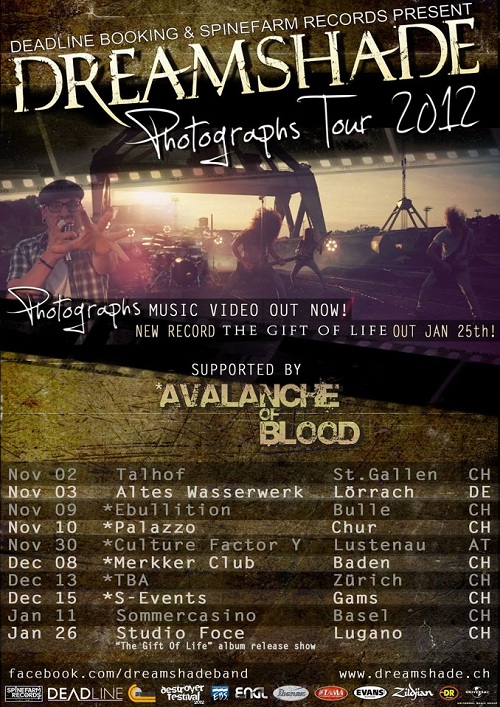 DREAMSHADE – The Gift Of Life