DUSKMACHINE are going to release their new album, mixed by Achim Köhler, in about 4 weeks!

The band has now released the official video clip for the song “Endless“, which is taken from the upcoming album “DuskMachine“.

It was shot in Berlin’s MiddleEastMambo Studio with director Achilleas Gatsopoulos (Hypnagogia Films) and features Joanna Tuczynska as “Religion” and “Temptation”.

Some of you may know her from OOMPH!’s “Sex Hat Keine Macht” video clip. 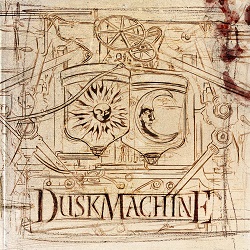 “Endless is about the ideal relationship…one that only happens to a minority of us. A relationship built in strength, passion and pure unselfish love. A relationship that stands the test of time, can’t be broken, swayed or tempted and is the piece of the puzzle which makes us complete.
A partnership of trust and understanding.
Seek the truth, find the truth, embrace the truth.
There can only be one outcome…’we are ENDLESS’…”

DUSKMACHINE’s self-titled album will be released on July 26, 2013 via Massacre Records!