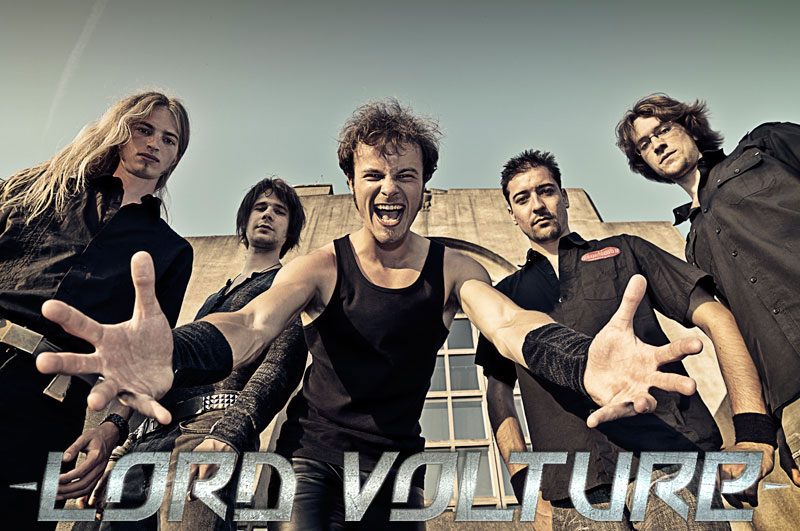 Full song “Never Cry Wolf” can be streamed below:

‘The majestic of a lordship, the velocity and power of an electrical charge and the beastly ruggedness of a scavenging vulture‘

LORD VOLTURE is a heavy metal band hailing from The Netherlands founded by vocalist David Marcelis. After an explosive take-off in 2010 with the release of their debut albumBEAST OF THUNDER and an intensive touring schedule, the band rapidly rises to find themselves in the frontier of Dutch Heavy Metal. The album thunders through the global metal community and reviewers worldwide count BEAST OF THUNDER among the major releases of 2010 (10/12 Ancient Spirit, 88/100 Digital Steel, 85/100 Mario’s Metal Mania, 4/5 Maximum Metal, 9/10 Maxirock, 8.5/10 Metal District, 4/5 Metal Rules, 86/100 Metal To Infinity, 87/100 Metalfan, 5/7 Mindview, 8/10 My Global Mind, 80/100 Zware Metalen, 95/100 Steel and Fire Records). LORD VOLTURE’s sound and style is said to resemble US power metal masters JAG PANZER, ICED EARTH, CAGE and VICIOUS RUMORS. The band’s ever growing reputation opens doors to many headline performances, as well as support shows for BLAZE BAYLEY, James Rivera’s SABBATH JUDAS SABBATH, TOKYO BLADE, CONQUEST OF STEEL and PICTURE.

With the release of the band’s second full-length NEVER CRY WOLF in November 2011 LORD VOLTURE progresses to the next level without abandoning their traditional sound nor the uncompromising energy that characterizes the debut album. Containing upbeat thrash tracks, eloquent epics as well as catchy rockers the new album is even more dynamic in nature and yet again, the reviews speak for themselves (10/10 Planetmosh, 10/10 Sweden Metal, 88/100 Lords Of Metal, 9/10 Metal Express Radio, 92/100 Metalfan, 8/10 Metalize.me, 91/100 Metal To Infinity, 8.5/10 Metal1.info, 8.5/10 PowerMetal.de, 9/10 Terrorverlag). The tradition to invite a renown guest set on BEAST OF THUNDER with ANNIHILATOR’s Jeff Waters is being continued on NEVER CRY WOLF with no one less than CAGE singer Sean Peck. But also the LORD VOLTURE members themselves show their worth. The piercing mid and high register of singer David, the shredding solos of guitar duo Paul Marcelis/Leon Hermans and the pounding rhythm machine of bass player Simon Geurts and drummer Frank Wintermans deliver all ingredients for the ultimate metal sound. For all who bear a heart of steel, LORD VOLTURE is a definite MUST!

Hot News: Lord Volture Podcast 4, The Making of the Minutes to Madness Videoclip